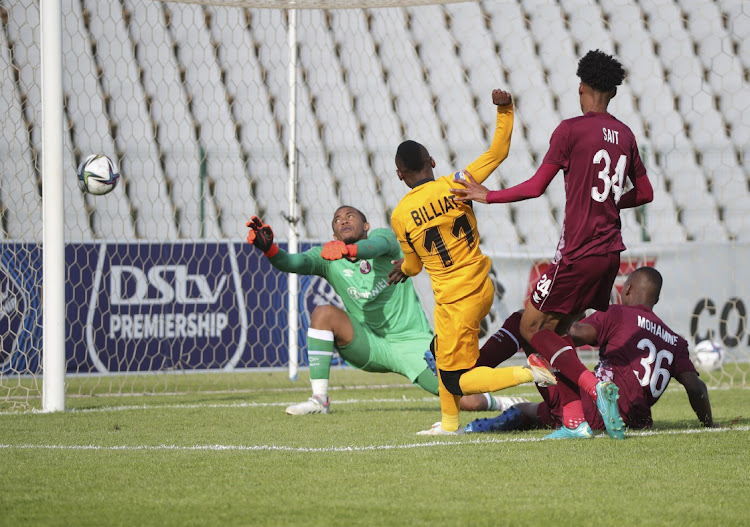 Billiat scored the brace while Dolly netted the other to hand Chiefs all three points and saw them move to second on the DStv Premiership log standings.

Baxter was pleased with the three performances, and described the three goals they scored as classics.

“I think the front three Bernard included, they all did very well. They pressed very well in the first half and that resulted in very good chances,” Barker told the club media department after the match.

“And if you give them an inch, they will take a yard. They found themselves with a little bit of space and three goals were the results.

“Very difficult game. The pitch was very troublesome and the wind was very strong. So, it made good football quite difficult.

“But we produced three classics of excellent play in scoring three goals and I think we managed the game quite well as it went on. I am a little bit upset that we conceded a goal. It was a bad mistake we made as a team to concede that.

Baxter also handed Kearyn Baccus and Happy Mashiane their first starts of the campaign yesterday, and was also satisfied with their performance.

“With these games, we had in a very short time the load on the players was enormous, so we were cautious to the fact that we had a lot of changes, we tried to ease the load as well in the finish game and I thought Baccus was excellent in his role. It was good.”

Meanwhile, Swallows Brandon Truter feels his side were let down by poor finishing again.

Swallows have only scored three goals this season in the league.

“We were superior but they turned two balls over and they scored and that’s the difference at the moment for the individuals.

“We created chances, there was one team in the park but the difference is the quality and the turnovers and the mistakes we made.”

Following the defeat, Swallows dropped to the bottom of the table with eight points from 12 matches.

Orlando Pirates continued to go about their business on the continent quietly when they beat LRPC Oilers of Liberia 2-0 in an away encounter at ...
Sport
6 months ago

Sekhukhune United coach MacDonald Makhubedu was as diplomatic as he could be saying, "It was not a penalty but I will take it", after his team's 2-0 ...
Sport
6 months ago

Neo Maema is not only becoming a key player at Mamelodi Sundowns but he is also winning the hearts of Masandawana supporters with his impressive ...
Sport
6 months ago

Golden Arrows will hope to end their five-game winless run in the DStv Premiership when they play host to Baroka at the Princess Magogo Stadium on ...
Sport
6 months ago
Next Article