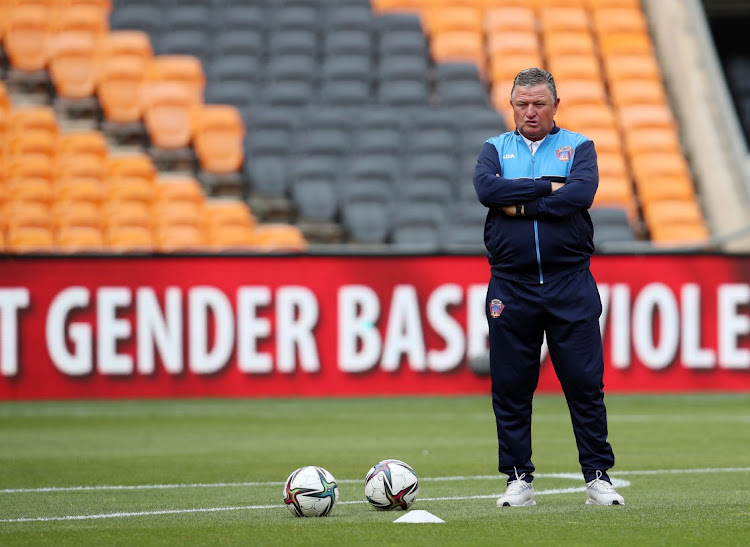 Sundowns have dispelled rumours of looking for a new coach in Gavin Hunt.
Image: Muzi Ntombela/BackpagePix

Swallows have denied speaking to coach Gavin Hunt as a possible replacement for under-fire Brandon Truter at the club.

Sowetan had been informed that talks between Hunt and the club were at an advanced stage following their poor run in the DStv Premiership.

But Swallows chair David Mogashoa insisted Truter has their full support for now, but he needs to find out what’s the reason for the club’s struggle.

“I’m supporting him... even now I’m going to training. We must not always be quick to fire coaches. We must first find out why they are not performing,” Mogashoa explained to Sowetan yesterday.

“So it is not always the coach’s problem, but I can confirm to you that I am not speaking to any coach.

“I’m going to training to assess properly to see where the problem is and then from my assessment, I will be able to make an informed decision.

“At this stage, we trusted him to do the training and prepare the team for matches, but results are not coming. So now I need to work very closely with them to find out where the problems are.

“I just want to work closely with him and monitor the training and see what’s going on there.”

At the current rate, Swallows could find themselves relegated to the GladAfrica Championship at the end of the season as they are second from the bottom. They have only won once since their opening 1-0 victory over Royal AM and have only scored twice in the process.

“The team will survive. There is no way I will allow this team to be relegated. If it is the players who are not working well with the coach, then they must go,” he said.

“We can’t always fire coaches because they do what they have to do at training and come match day, players don’t do what they are supposed to do. I don’t even have Hunt numbers.

“Remember the game we played against Cape Town City and we lost 4-0, one of the things that coach Simo Dladla said is that the players were not following instructions.

“Now you need to identify those players and find out what the problems are and if there are problems that we cannot resolve, then they need to leave the team. It is as simple as that.”

The impressive run Stellenbosch are having is a result of the their resilience and team spirit, says striker Ashley du Preez, who is not surprised by ...
Sport
2 months ago

Mamelodi Sundowns' impressive defensive record will be put to the test when they take on SuperSport United in the Tshwane derby at Loftus on ...
Sport
2 months ago

If there is a team that can score against Mamelodi Sundowns, it has to be SuperSport United.
Sport
2 months ago

Playing more games than any other goalkeeper at Kaizer Chiefs this season hasn’t tempted Daniel Akpeyi to regard himself as the club’s undisputed ...
Sport
2 months ago
Next Article