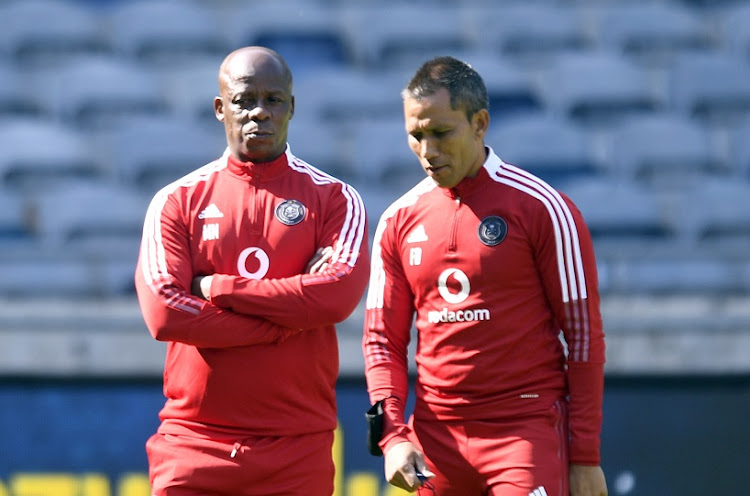 Have Orlando Pirates deteriorated or improved under the guidance of co-coaches Fadlu Davids and Mandla Ncikazi?

Since taking over from Josef Zinnbauer in August, they have only won three in 11 matches with six draws and two defeats.

In the process, the Buccaneers have only managed to score 11 goals and conceded 10, with 15 points collected.

Ex-players Andries Sebola and Edward Motale shared their contrasting opinions on how Bucs have fared under Davids and Ncikazi, with Sebola adamant the duo should have been let go by now.

“They are not the right material for Pirates,” Sebola told Sowetan yesterday. “More especially Mandla. Fadlu is still growing. He is still young. But Mandla did well for Arrows, which is a small team. But at Pirates, the club is too big for him and we need results now.

“The chairman [Irvin] Khoza and the management have to go and look for the coach who will deliver the results for the club. We cannot go and draw away and say the team played well, we created chances, while we didn’t score goals.”

Sebola refused to buy into the idea that injuries were the reason Pirates struggled this season.

Pirates have been hit by long-term injuries like those of Zakhele Lepasa, Thembikosi Lorch and Tshegofatso Mabasa. Ben Motshwari and Gabadinho Mhango have missed out on playing due to personal issues.

“The line-up keeps on changing week-in and week-out,” Sebola said. “We cannot talk about injuries because they have good players. We also have a development side where there are young players that can help the team. The combinations are not there.”

Motale, however, disagreed and highlighted lack of scoring as the main problem they are facing. “The only problem is that they are not scoring goals. They are creating chances but they can’t utilise them,” he said.

“Remember, the coach can only do 80%, the last 20% should be done by players. I don’t think a coach can coach a team and score for them.

“He can only coach them to score goals. I’m happy about them, plus they are locals and they know the culture and teams. If players are not scoring, we can’t blame the coaches.”

Pirates will look to end their poor run when they visit in-form Stellenbosch at Danie Craven Stadium today (5.30pm).

The struggles Orlando Pirates have endured this season have given Stellenbosch coach Steve Barker more hope that his side can get maximum points ...
Sport
1 month ago

As part of empowering the girl child, improving women’s club football and advancing its professionalism on the African continent, the Confederation ...
Sport
1 month ago

Amakhosi coach Baxter admitted it was far from champagne football as his team toughed out a DStv Premiership win at Harry Gwala Stadium on Sunday.
Sport
1 month ago

AmaZulu FC defenders Thembela Sikhakhane and Samkelo Mgwazela have not forgotten the controversial 1-1 draw they played against Kaizer Chiefs in a ...
Sport
1 month ago
Next Article