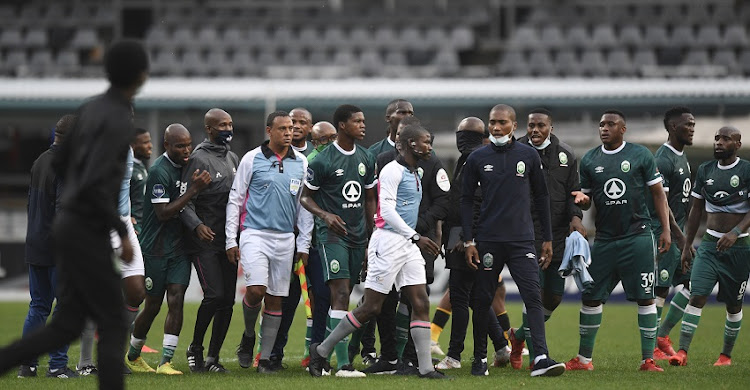 Match referee Jelly Chavani is questioned by AmaZulu players during the DStv Premiership match against Kaizer Chiefs. Chavani was suspended for four weeks after awarding a soft penalty to Chiefs in October
Image: Sydney Mahlangu/BackpagePix/Gallo Images

AmaZulu defenders Thembela Sikhakhane and Samkelo Mgwazela have not forgotten the controversial 1-1 draw they played against Kaizer Chiefs in a DStv Premiership match in Durban in October.

Usuthu were cruising on the way to grabbing all three points after Luvuyo Memela gave them a 48th minute lead, but referee Jelly Chavani and his assistant Moeketsi Molelekoa  gave Chiefs what looked like a soft penalty right at the death.

Usuthu felt justified in their protest against that penalty when the SA Football Association (Safa) suspended Chavani and Molelekoa for four weeks as they viewed their call as very poor.

Speaking ahead of the return match at the FNB Stadium on Wednesday, Sikhakhane, a former Orlando Pirates right back, said they haven’t forgotten how they were denied victory in Durban.

“We deserved the points in that game but you know how football goes,” said Sikhakhane.

“I can say Chiefs owe us because of what happened against them in the first round. The spirit of the players is high and you can see everyone is itching to win the points against them.”

Mgwazela said they’re determined to win on Wednesday although he’s not happy they’ve been inconsistent this season.

“Obviously it is a big game we’re playing on Wednesday,” said the Usuthu centre back of the Chiefs tie.

“The guys and coach don’t want to lose this game because everyone knows Chiefs owes us. They got a late penalty in the last match and we were not convinced it was a penalty.

“Everyone is focussed and ready to go and we’re looking forward to playing this game. We don’t want to lose it. The coach told us we need to come to the party and start moving up the log like last season.”

Mgwazela commended the way they came back from two goals down to play a 2-2 draw away to Stellenbosch FC in Cape Town at the weekend, and said it is that kind of mentality which will help them against Chiefs.

“I think we mustn’t take away that Stellenbosch is a good team and they’re in the top three for now.

“But we always have that fighting spirit since we went to the Caf Champions league and playing (against TP Mazembe) in Lubumbashi.

“It’s just that we’re not being consistent in terms of the games we win and the next one we lose or draw.

“What we need to do is to be consistent, but I’m very happy with the boys. We always fight and the fighting spirit at the weekend against Stellenbosch was superb.

“I definitely want to see the same against Chiefs and it will happen. I believe it will happen and we can steal the three points.”