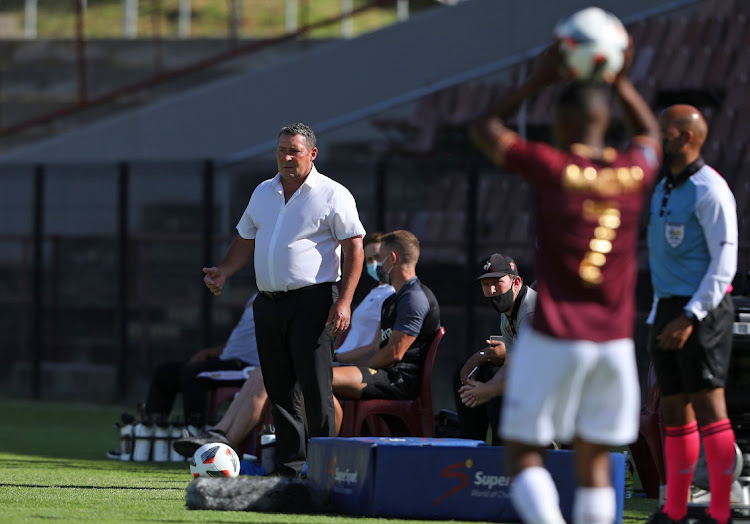 The struggles Orlando Pirates have endured this season have given Stellenbosch coach Steve Barker more hope that his side can get maximum points against them.

Barker said though they were not reading too much in Pirates’ struggles, they would face them with the belief that they could get all three points.

“We all know Pirates have the individual quality to win any football game. We can’t look too much into their inconsistencies but rather focus on what we need to be doing and be aware of the challenges they will provide us,” Barker told the club’s media department yesterday.

“But in saying all of that, I feel for the first time in this league that we can go into the game against Pirates and feel confident that we can get maximum points.”

Stellies are one of the early contenders for the league title as they are unbeaten in 11 matches, going from last season’s relegation candidates to second on the DStv log this season.

Barker feels the reason they have done well this season is because of their high conversion rate. They are scoring more from the chances they are creating than they did in their last campaign.

“The players have got more experienced and are mature. The confidence level is high up there. They had a very good preseason,” he said.

“Starting the season well always give you the momentum but I think the main factor is our conversion rate. It is not as if we are creating as many chances as we did last year.

“We are converting our rate a lot higher than it was last season and I think it is clear for everyone to see that we did create chances in the past and we were not taking them.

“Fortunately, this season we are and long may it continue.”

Barker’s charges will go into this fixture at the back of their 2-2 draw against AmaZulu in a match they were leading 2-0, only for Usuthu to fight back.

“It is a short turnaround, win or lose. You have to get over this quickly and refocus on the match against Pirates. It will be our third home game in a row.

“We drew the previous two, so we must get maximum points against Pirates.”

Shaun Bartlett focuses on returning Spurs to the PSL

Cape Town Spurs coach Shaun Bartlett aspires to guide the Urban Warriors back to the Premiership, despite that the club’s hierarchy hasn’t given him ...
Sport
1 week ago

New Baroka coach Kgoloko Thobejane has set a lofty target of 15 points in their next five matches to improve their position.
Sport
1 week ago

Baxter looks to build momentum after away victory

Kaizer Chiefs coach Stuart Baxter is of the sentiment that stringing two wins together in a row entitles them to be on cloud nine.
Sport
1 week ago

SuperSport United captain Ronwen Williams has called on his teammates to be more consistent as they face the "game of the season" in tomorrow’s ...
Sport
1 week ago
Next Article