SA vs Zimbabwe: Three key players who are going to be key for Bafana Bafana 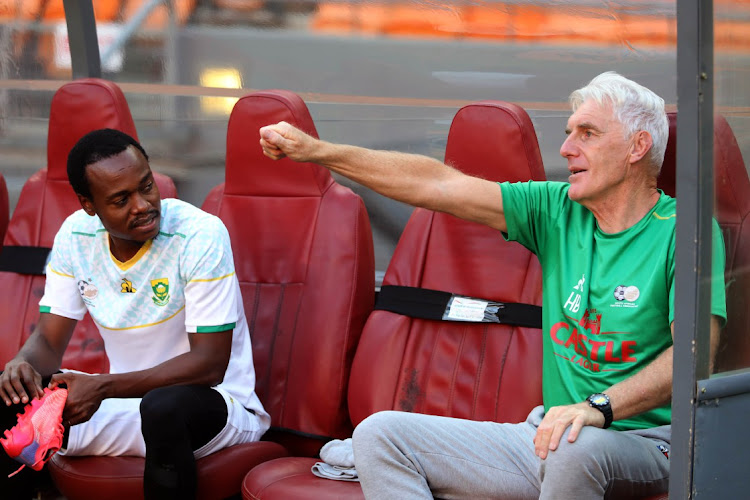 Percy Tau (left) will be one of the key players for Bafana Bafana coach Hugo Broos during the World Cup qualifier against Zimbabwe at FNB Stadium on Thursday.
Image: ANTONIO MUCHAVE

Bafana Bafana have their qualifying fate in their own hands as they head to Thursday's crunch 2022 World Cup qualifier against the Warriors of Zimbabwe which they will be determined to win at FNB Stadium on Thursday.

A win against Zimbabwe would leave Bafana in a favourable position to progress to the last round of qualifiers, regardless of what happens in the other Group G match between Ethiopia and Ghana at Orlando Stadium.

TimesLIVE examines the three key Bafana players who can win all the three points in Thursday’s clash:

Williams must lead from the front on Thursday and he will be expected to deliver another solid performance between the sticks to thwart Zimbabwean attackers like Knox Mutizwa of Golden Arrows and Khama Biliat of Kaizer Chiefs.

The goalkeeper has been highly impressive for Bafana during the qualifiers as he has conceded only one goal against Ethiopia in four matches, and he has kept three clean sheets in the process.

In what may be an advantage, Zimbabwe coach Norman Mapeza is going to rely on players like Mutizwa, Billiat and Kuda Mahachi, players who are based in SA and are very familiar with the local conditions.

Tau makes a welcome return to the side for this must-win clash after he missed the back-to-back wins over Ethiopia, and the notable victory over fancied Ghana at home.

During the qualifiers, Tau only played in the first match against Zimbabwe in a goalless draw in Harare in September but was dropped by coach Hugo Broos due to lack of fitness.

The ‘Lion of Judah’ has regained fitness and rediscovered his scoring touch at Egyptian giants Al Ahly with two goals in three matches so far in the league.

The experienced Kaizer Chiefs attacker is expected to walk straight into the starting line-up to shore up the midfield that was nearly found wanting in their last match where they narrowly beat Ethiopia 1-0 at FNB Stadium.

In the win over Ethiopia, coach Broos played Yusuf Maart and Njabulo Ngcobo as defensive midfielders, and left Teboho Mokoena, Bongokuhle Hlongwane and Victor Letsoalo with freedom to attack.

Up front, Evidence Makgopa was deployed as the lone striker and this attacking formation will definitely change because Maart is injured and Dolly is available for selection.

Dolly will be looking to transform his form with Amakhosi, where he has scored five goals in ten matches, to the national team.