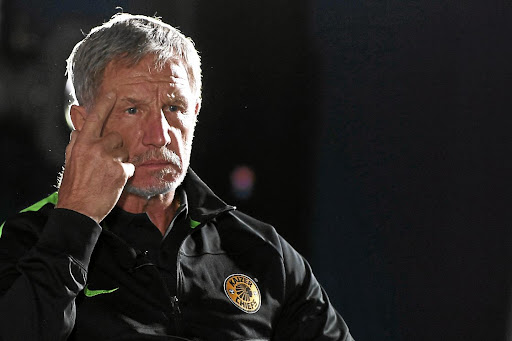 Davids, in his digital post-match press conference, asserted Pirates had enjoyed “total dominance” in the DStv Premiership game they lost 2-1, and said Baxter’s “apology” as the coaches shook hands afterwards was testament to that.

Baxter though, in his briefing, said Davids had taken his comments out of context and was adamant he had not apologised for any of referee Victor Hlungwani’s decisions, including the added time penalty awarded when Bucs centre-back Olisa Ndah slung an arm round the neck of Chiefs’ Khama Billiat.

“Let me clear up what I actually said to Fadlu after the game, because I went up to him, and I don’t like rubbing people’s noses in it, so I tried to be a bit politically correct, and I said to him, ‘These refereeing decisions can go both ways’, et cetera, et cetera," Baxter said.

“Very nondescript, I certainly wasn’t apologising for anything – that is not in my nature to apologise for winning.

“But I did say that decisions go for you, they don’t go for you, ‘but well done on a good performance’. And I said, ‘Yeah, Fadlu, you and Mandla [Ncikazi] are doing a good job’. That was our conversation.

“The penalties, look, I’ve not looked at it, but every player I’ve spoken to said they thought it [Bucs captain Thulani Hlatshwayo’s handball] was a penalty in the first half.

“I thought there was a red card in the first half, very early on. And the penalty that we got I thought was a penalty – he [Ndah] was climbing all over Khama.

“And I thought it was clumsy, but that’s the sort of thing that happens when you’ve just scored a goal, the adrenaline is pumping, and the opposing team puts you under pressure, and in that period of time you’re a bit tired and you make a bad decision.

If there was a penalty decision in Saturday’s derby Hlungwani perhaps did err on, it was missing a handball from Hlatshwayo in the first half.

It was former Bafana Bafana captain Hlatshwayo whose back-pass led to Dolly’s opener for Chiefs in the 49th minute. Linda Mntambo scored a soft equaliser for Pirates in the 87th.

Then Ndah’s rush of blood, unnecessarily tugging round the neck of Billiat having won the aerial challenge, led to Dolly’s 92nd-minute spot-kick winner.