Arsenal continue to climb with win over Watford 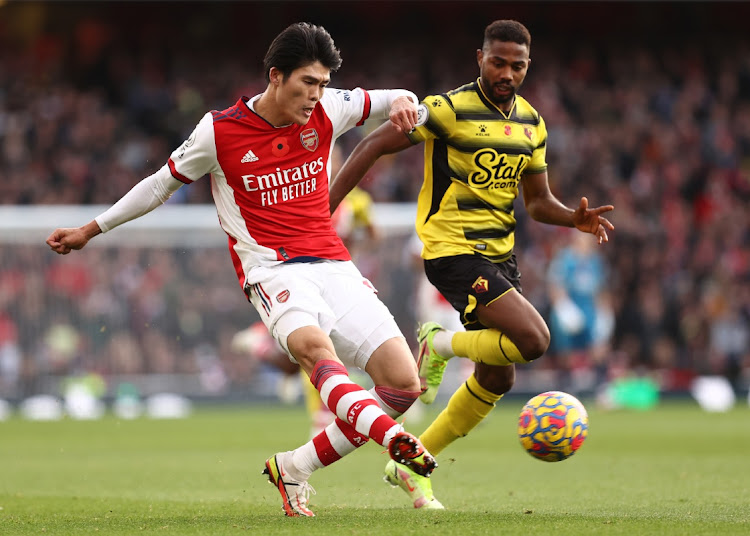 Takehiro Tomiyasu of Arsenal makes a pass during the Premier League match between Arsenal and Watford at Emirates Stadium on November 07, 2021 in London.
Image: Ryan Pierse

London - Arsenal closed in on the Premier League top four after a second-half goal from Emile Smith-Rowe gave them a 1-0 home win over Watford yesterday in manager Mikael Arteta's 100th league and cup game in charge.

The result lifted Arsenal lifted one place up to fifth on 20 points from 11 games, behind fourth-placed West Ham on goal difference with the Hammers at home to third-placed Liverpool in the 1530 GMT kick-off.

Smith-Rowe netted Arsenal's 100th league goal under Arteta as he drilled in a low shot from 18 metres after striker Pierre-Emerick Aubameyang had missed a first half penalty for the home side, who also had two goals ruled out for offside.

Bukayo Saka's early effort was disallowed and Watford goalkeeper Ben Foster smothered Aubameyang's 35th-minute spot kick before he also kept out a close-range Gabriel header with a superb reflex save.

But Foster was powerless in the 56th minute when Arsenal defender Ben White surged forward after winning possession in midfield and teed up Smith-Rowe, who found the back of the net with a first-time shot.

Aubameyang had a 73rd-minute goal chalked off and Joshua King missed Watford's solitary chance in the 86th before the visitors had Juraj Kucka sent off for a second yellow card after he fouled Arsenal's left back Nuno Tavares.

Brazilian Raphinha fired Leeds ahead in the 26th minute of a breathless opening half with a vicious low free kick that beat a diving Kasper Schmeichel and crept into the bottom left corner before Leicester hit back in style two minutes later.

Barnes darted into the penalty area and unleashed a curling right-footed effort from a tight angle that gave Illan Meslier no chance in the Leeds goal to equalise and silence the raucous home crowd.