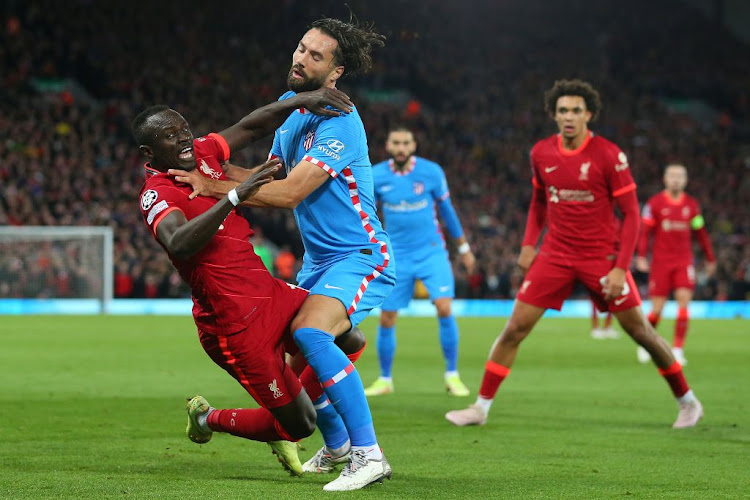 Sadio Mane of Liverpool is barged to the floor by Felipe of Atletico Madrid during the UEFA Champions League group B match between the two sides at Anfield on November 3, 2021 in Liverpool, United Kingdom.
Image: Robbie Jay Barratt - AMA/Getty Images

Juergen Klopp said he “hated” taking Sadio Mane off at halftime of their 2-0 Champions League win over Atletico Madrid but with the Senegal striker on a yellow card the Liverpool manager feared the visitors would try to get him sent off.

Diogo Jota scored the opener and Mane added another in the first half on Wednesday before Atletico were reduced to 10 men when defender Felipe was red-carded for tripping Mane, who was booked early on for a clash with Angel Correa.

“Probably everybody in the stadium expected I would do it and I thought it was the right thing to do,” Klopp told reporters.

“I hated it more than you can imagine because Sadio played an incredible game, but then what's the decision? I was not worried that Sadio cannot handle his emotions, he was calm.

“The thing is, the ball comes in the air, you go in for a heading challenge and the other player is going down ... we all saw what some Madrid players did, rolling over more and more in all the situations to equal the number of players again.”

Group B leaders Liverpool are through to the knockout stages with two games to spare. They return to Premier League action against West Ham United on Sunday.