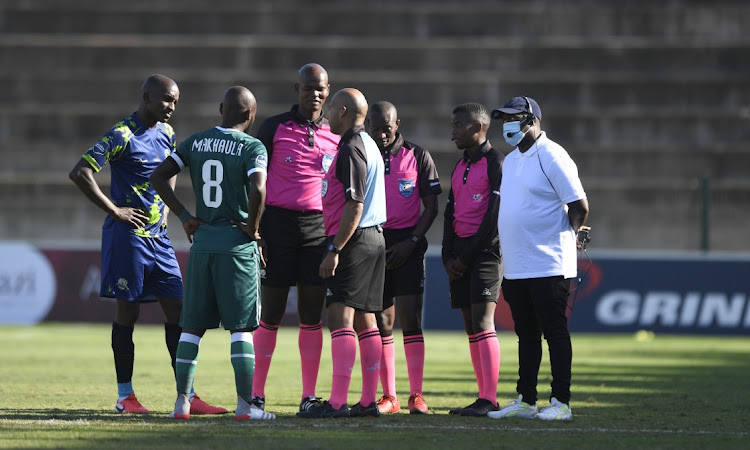 Match Officials call of the game dues to clash of Kits during the DStv Premiership 2021/22 match between AmaZulu and Marumo Gallants on the 03 November 2021 at King Zwelithini Stadium, Umlazi.
Image: Sydney Mahlangu/BackpagePix

Marumo Gallants again found themselves at odds with the PSL rules yesterday when it emerged they didn’t have an alternative kit against AmaZulu, resulting in the game being abandoned.

The match at King Zwelithini Stadium in Umlazi was called off after both benches seemingly alerted referee Christopher Kistoor about the clashing kit colours just nine minutes into the encounter.

The PSL confirmed the match has since been rescheduled for today at the same venue (3.30pm). PSL prosecutor Nande Becker has made it clear the guilty parties in this fiasco will pay the costs incurred by broadcaster SuperSport and other affected stakeholders.

“To my mind, I will be looking at the possibility of holding somebody who caused this responsible such that they must pay the costs incurred. On top of that they could be a fine and sanctions as well. I have already asked for figures from SuperSport,'' Becker told Sowetan.

Becker also suggested the match officials should also take a fair share of criticism for not identifying the confusion in the pre-match meeting a day before the game.

“I can’t understand that the match was abandoned because there’s a pre-match meeting that takes place at least a day before the match so that issues like kit clashes and everything like that can be sorted out,’’ said Becker.

AmaZulu, the hosts, were clad in their traditional green colours while Gallants donned dark navy, which is their home colours. Match officials took about 30 minutes on the call with the PSL hierarchy before calling-off the tie. A source close to AmaZulu confirmed the visitors didn’t have an alternative kit.

“Gallants made it clear they came with one set of kit and that is against the PSL rules. The referees consulted with the high-ranking league officials before taking the decision to call the game off,’’ said the informant who was at the venue.

What renders Gallants blameworthy is that article 17.2 of the PSL constitution, as stipulated in the handbook, states: “Both member clubs must take their official team outfit as well as their alternative team outfit to all matches.”

Article 17.3 makes it clear it’s the visiting side’s responsibility to ascertain the colours of the home team. It’s clear Gallants didn’t bother to find out was colour AmaZulu were going to use.

SuperSport United coach Kaitano Tembo is upset with his player Luke Fleurs after the centre-back was red carded having received two yellow cards in ...
Sport
6 months ago

TS Galaxy coach Sead Ramovic has expressed his relief after his side's 2-1 win against Baroka to end a nine-match drought on Tuesday.
Sport
6 months ago

Royal AM are growing in confidence and proving to be one of the Premiership’s surprise packages this season after they snatched victory from the jaws ...
Sport
6 months ago
Next Article