Makhubedu hopes to bounce back after Bucs defeat 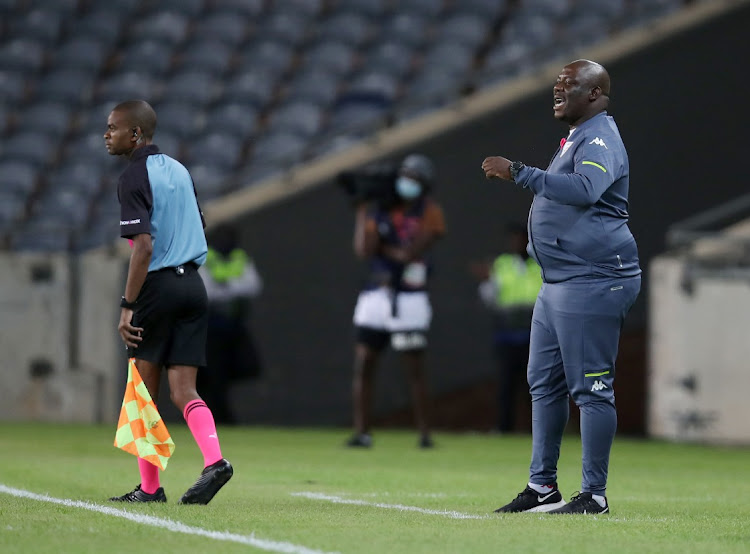 Disappointment and dejection were written all over Sekhukhune United coach McDonald Makhubedu’s face after their 2-1 defeat to Orlando Pirates at Orlando Stadium on Tuesday.

Before the defeat at Pirates, where they scored first via Seth Parusnath before Linda Mntambo and Kabelo Dlamini struck for the hosts, Sekhukhune had strung together three successive victories.

In a virtual post-match media conference, Makhubedu didn’t hold back, slating his troops for surrendering their lead. The Babina Noko mentor was more incensed about how they conceded the second goal late in the second half.

“I will accept mistakes from human beings – we all make mistakes – but they mustn’t be costly mistakes. I am not happy with some other things. Let me say it, I am not happy with a certain aspect of our game. We could have done better,” a visibly dispirited Makhubedu said.

Makhubedu also shed some light on the strange absence of Bafana Bafana midfielder Yusuf Maart from the team for the past two games, implying that it has been a tactical decision.

“He’s fine. He’s still our main man. It’s just that he’s not trained well. We still want him to give us more as our key player. He’s not injured... he’s good. He’ll go to the national team and do well for us,” said Makhubedu.

The 26-year-old Maart, who’s been heavily linked to Kaizer Chiefs in recent months, was included in Bafana's squad to face Zimbabwe and Ghana in the 2022 Fifa World Cup qualifiers home and away next week.

Despite being new to the division, Sekhukhune have won four of their nine games so far, with two draws and three defeats in the league. Makhubedu is satisfied with their position.

“I think we’ve done well so far. Being in the top five within the first nine games is good for us,” he said.

Pirates need to convert chances to be competitive – Ncikazi

Orlando Pirates co-coach Mandla Ncikazi has given an impression that converting chances is the only missing element before Buccaneers are a complete ...
Sport
6 months ago

Since embattled Swallows coach Brandon Truter returned from leave, the Birds have failed to register a win in the DStv Premiership.
Sport
6 months ago

Mamelodi Sundowns reached another milestone as they set a new record of 11 consecutive league clean-sheets after their hard-fought 1-0 victory over ...
Sport
6 months ago

Marumo Gallants again found themselves at odds with the PSL rules yesterday when it emerged they didn’t have an alternative kit against AmaZulu, ...
Sport
6 months ago
Next Article