Stadium security officials detail the impact of Covid-19 on their livelihood: 'Some families broke up' 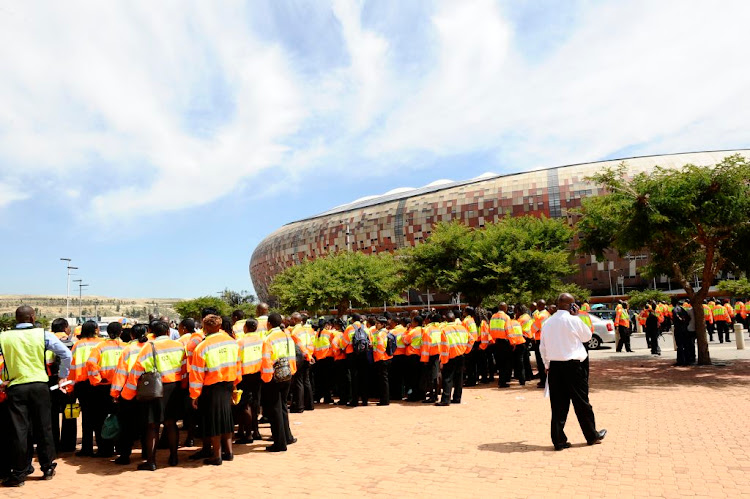 The outbreak of the coronavirus pandemic has had a devastating impact across the globe,  but there are signs that life is gradually returning to some semblance of normality.

In SA, scores of security guards, informal merchandisers and many other small businessmen and women who work at venues around the country selling food, regalia and beverages during Premier Soccer League (PSL) matches suffered a huge loss of income when the lockdown was implemented early last year.

While sports events eventually returned as the world continues to battle Covid-19, no fans were allowed to attend and this meant less work for those whose living is heavily reliant on people walking through the turnstiles at stadiums every week. But venues are slowly welcoming fans back and this means there is hope for the many who depend on the so-called stadium economy for their livelihood.

Relief was etched on the faces of some of the security guards who worked at Moses Mabhida stadium at the MTN8 final between Mamelodi Sundowns and Cape Town City on Saturday night, and they were grateful that they could finally have an opportunity to put food on the table again after months of uncertainty.

“To be honest my brother, we have suffered a lot since the lockdown was imposed because of the huge loss of income,” an emotional Nhlanhla Sibiya told TimesLIVE outside Moses Mabhida Stadium on Saturday.

“I don’t know how some of us made it all these months because things were bad while sitting at home with no income at all. I am speaking for myself, but I can tell you that almost all security officers who work part-time went through the same thing.

“There are some people whose families have broken up because they couldn’t provide for them, and there are many who struggled and continue to struggle with stress because of losing their income.”

The SA Football Association piloted the first attempt to accommodate supporters back in the stadium when 2,000 fans were allowed to attend the 2022 World Cup qualifier between Bafana Bafana and Ethiopian recently.

The test project was very successful and the PSL followed suit when 2,000 tickets were made available to the MTN final between Sundowns and City on Saturday. The tickets went to the two finalists, accredited personnel, including working staff, members of the media, players, technical team members and match officials.

All attendees had to be fully vaccinated.

Safa is considering increasing the number of supporters from 2,000 to more than 20,000 for Bafana’s next match at home against Zimbabwe this month, but everyone, including the media, security and vendors, will have to produce vaccine certificates.

The PSL will likely follow suit and increase the numbers when traditional rivals Kaizer Chiefs and Orlando Pirates face each other at FNB Stadium in the Soweto derby on Saturday.

Nkululeko Mdlalose said the last few months have been tough.

“Just imagine, our lives were already difficult even before the lockdown because we don’t earn much as security officers. We are temporary workers who depend on events, which are mostly on weekends.

“We use this money to pay school fees, buy food for our families and look after ourselves. When the little that we used to make was taken away from us by this pandemic, things went from bad to worse.

“It is not only us as security. Think about the cleaners, those who sell food outside the stadiums. Think of the people who work at hospitality, the suites and other service providers at venues.”

A female security officer who did not want to be named said she is hoping for all the sporting codes to start welcoming fans back so that they can start earning an income on a regular basis again.

“This is a good start, but it will help us if we have fans back at all PSL, rugby and cricket matches because they are the biggest sporting codes that draw a lot of fans. And when you have a lot of fans, you need a lot of security officers.

“Like my colleagues have already told you, it has not been easy for all of us because we survive on handouts. But at least we see the light at the end of the tunnel,” she said.