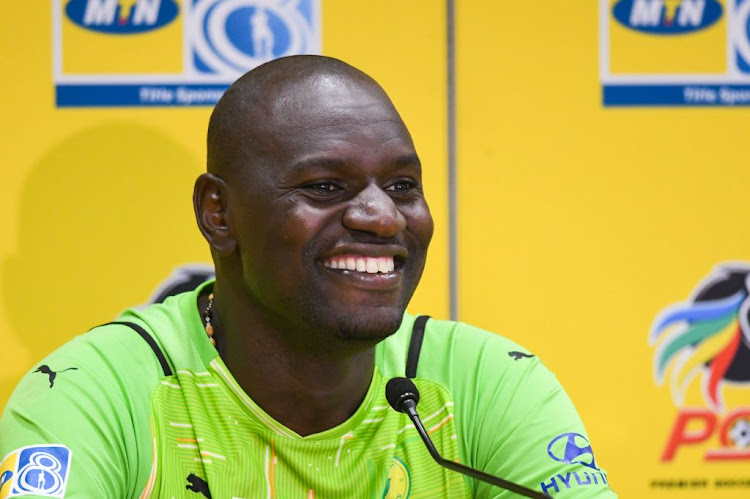 Mamelodi Sundowns goalkeeper Denis Onyango is all smiles after inspiring his side to beat Cape Town City in the MTN8 final at the Moses Mabhida Stadium on October 30, 2021 in Durban, South Africa.
Image: Darren Stewart/Gallo Images

Denis Onyango may have won every trophy with Mamelodi Sundowns in the DStv Premiership, but he is still hungry for more.

Onyango, who was a hero as he saved five penalties to help Sundowns win the MTN8 title for the first time in 14 years against Cape Town City on Saturday, set his sights on winning the CAF Champions League again with the club.

Sundowns last won the continental competition in 2016 and the veteran goalkeeper revealed that he wants to become the first Ugandan to win the title twice. “I still want to win the Champions League and that’s the objective for the club as well,” Onyango told the media.

“It’s huge winning the Champions League and I want to be the first Ugandan player to win it twice and it’s a big one that I’m really looking forward to. But we need to collect the ones in front of us. They give us momentum going forward and I think this was a good one for me because I have never won it. I lost a few of times before.

“The more we fight, the more we get trophies and I think we need to garner for the Champions League and also keep the focus on the league.”

The MTN8 was also special to Onyango, who wears the number 14 jersey for Sundowns, as they ended their 14-year wait to lift the title at Moses Mabhida Stadium.

“Every trophy is special, but this one has been away for a long time. Someone told me that I was lucky number 14 since I wear jersey number 14 and it has been 14 years since Sundowns won the MTN8,” he said.

“Probably, my shirt number may have made it possible, but the boys fought well and kept on believing even when we missed the first two penalties. We knew we needed to stay focused.

“But good fight from the boys and I had to reward the goalkeepers because they have been doing a great job since the tournament started. All of them did well when they came in, so it was my chance to reward them and make it possible for the team to win this trophy.”

The 36-year-old has been in fine form this season as he is yet to be beaten in league matches and will hope to continue with that when they host Maritzburg United at Loftus Versfeld Stadium tomorrow at 5.30pm.

Mamelodi Sundowns co-coach Rulani Mokwena says he cannot remember what he said in a speech he gave to his players during the MTN8 final, but was ...
Sport
7 months ago

Stellenbosch mentor Steve Barker is wary of the threat Kaizer Chiefs pose in attack, singling out Keagan Dolly as the man they should close down when ...
Sport
7 months ago

The return of striker Bradley Grobler from an unspecified injury, combined with the eight days they’ve been inactive before today’s game away to ...
Sport
7 months ago

High-flying Sekhukhune United travel to Soweto with the belief that they can surprise Orlando Pirates at their Orlando Stadium backyard when the two ...
Sport
7 months ago
Next Article