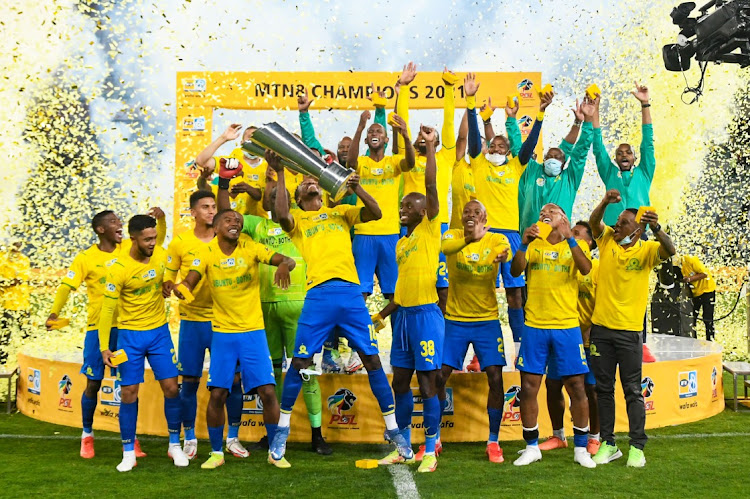 Mamelodi Sundowns co-coach Rulani Mokwena says he cannot remember what he said in a speech he gave to his players during the MTN8 final, but was happy that it worked after they beat Cape Town City to hoist the trophy over the weekend.

In a speech captured live by television cameras at Moses Mabhida Stadium, Mokwena spoke about the bravery of Hector Pieterson, a schoolboy who was killed by apartheid police during the student uprisings in Soweto in 1976.

“I don't know what I said,” a giggling Mokwena said. “I have these crazy moments and I'm sure the players look at me and they say 'here he goes again'.

“I really don't know what I said, but seemingly it had a reaction because [they were braver] in extra time and there was more courage. But, good. As I said, you can give all the best speeches in the world but everything belongs to the players at the end of the day.

“If they received the message,  and [then] they go out, they fight and they perform. It [the speech] doesn't matter, what matters is the performance.”

Mokwena said the credit should always go to the players, and not to the coaches. “Let's not move too forward from the performance by these Sundowns players,” he said.

“We as coaches, we're just there to facilitate good performances and the rest of the spotlight deservedly must go to your Denis [Onyango], your Andile Jali and even your Neo Maema. How he came on, and Peter [Shalulile] and Mshishi [Themba Zwane]...

“Themba Zwane is undoubtedly at this moment unplayable. You've got to kick him and foul him to stop him. So good, we are in that space and we move again and the most important thing now is a very difficult [league] game on Wednesday [against Maritzburg United at Loftus stadium].

“We have a tough game on Wednesday, so we have to recover, regenerate and focus on making sure that we win.”

Mokwena also revealed that there was never a moment in Saturday's match that the Sundowns technical team thought of taking off lethal Namibian striker Shalulile as the Brazilians struggled to find the goals.

The Sundowns coach explained that there was never a discussion to remove Shalulile as they believed he could give them the advantage at any point during the game if he managed to get a sniff at goal. “He scores,” Mokwena answered when asked why they kept Shalulile on the pitch even when he struggled to impose himself on the proceedings as he usually does.

“He scores, I mean, it's a final, and it's very difficult [to take him off]. Even when Peter struggles, [as we saw] against Golden Arrows last season, we saw it against Black Leopards away in Thohoyandou last season, where he helped us nick three points right at the death.

“Peter's attitude is selflessness. His ability to run and sacrifice for the team allows us to be able not just to keep him on the pitch, not just because of the goal, but because he also personifies the mentality that we like to see on the pitch.

“Ja, that was the biggest reason. Very difficult to take off your top goal-scorer in a cup final when you need goals.”

Stellenbosch mentor Steve Barker is wary of the threat Kaizer Chiefs pose in attack, singling out Keagan Dolly as the man they should close down when ...
Sport
7 months ago

The return of striker Bradley Grobler from an unspecified injury, combined with the eight days they’ve been inactive before today’s game away to ...
Sport
7 months ago

High-flying Sekhukhune United travel to Soweto with the belief that they can surprise Orlando Pirates at their Orlando Stadium backyard when the two ...
Sport
7 months ago

Life at Naturena has not always been calm and tranquil this season, and coach Stuart Baxter will be the first to admit that his second coming at ...
Sport
7 months ago
Next Article