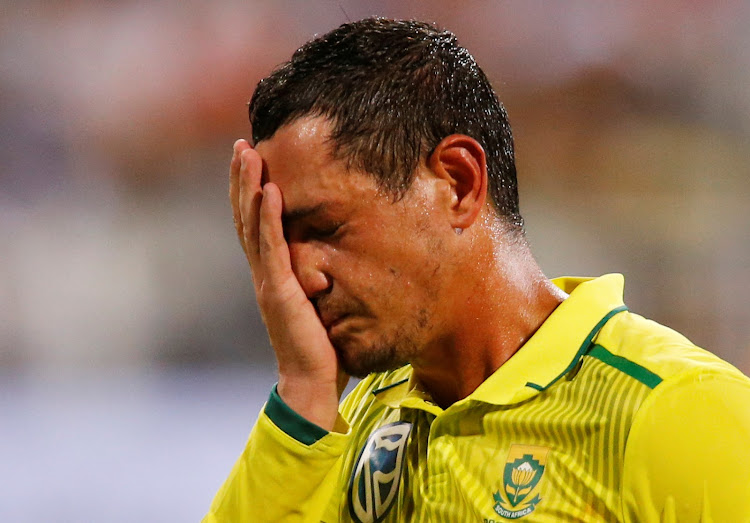 Quinton de Kock refused to take the knee as a sign of solidarity with the Black Lives Matter movement.
Image: Reuters/Rogan Ward

Outspoken Mamelodi Sundowns coach Rulani Mokwena has weighed in on the furious debate that accompanied  Quinton de Kock’s decision to make himself unavailable for the  T20 World Cup match against West Indies on Tuesday and said the Proteas wicketkeeper should have known better.

The 28-year-old De Kock took the decision after  the board of Cricket SA  (CSA) issued a directive to all the team members to take the knee before the contest and support the Black Lives Matter (BLM) movement.

Mokwena said given SA's painful past, the cricketer should have understood the importance of the gesture and  supported it, just like his teammates.

De Kock on Thursday apologised to the nation,  the Proteas skipper Temba Bavuma and  his teammates for pulling out just minutes before the start of Tuesday's match, which  SA won ahead of their third Super Six encounter against Sri Lanka on Saturday.

Mokwena addressed a football press briefing at the Moses Mabhida Stadium in Durban on Thursday afternoon ahead of Sundowns' MTN8 final showdown against Cape Town City on Saturday, but the De Kock furore has transcended sporting codes and dominated conversation in SA to such an extent that he was asked to offer his views.

“A very sensitive question,” Mokwena said. “As soon as it moves away from the sporting context and moves through to racial connotations it is hyper sensitive, and therefore I have to be extremely sensitive in what I say.

“Sometimes maybe you need a bit of context because it becomes very difficult to find conclusions out of context. But my opinion is the moment, of course, because of where we are as a country, everybody has a right to free speech and the freedom to be able to express what they believe in.

“He (De Kock) could easily say he comes from the background of saying that ‘all lives matter’ and not just black lives. But because of where we come from as a country and who we are, I think as soon as you represent the nation you than have to move a little bit away from your own personal beliefs and understand the type of nation that you represent.

“As a nation that is probably the flagship for democracy and supporting the importance of the black culture or the black nation, it becomes very important for us to understand that when you’re in that type of space, the ideology is that the beliefs must be the nation’s beliefs.

“Therefore I think it was not be proper for him not to take the knee.”

Mokwena, however, commended the former Proteas skipper for apologising on Thursday and clarifying why he took his decision, and why he now realises he made a mistake.

“It takes a person of huge character and humility to accept he’s wrong,” said Mokwena.

“Kudos to him for apologising because many wouldn’t and that’s unfortunately the space that we live in. Black lives do matter and we fully are behind that because of the past, and it will take a long time for us as a country and maybe as world to move away from this space of segregation and racial influences.

“The reality again is that the country is bigger than all of us.”

The Premier Soccer League announced this week that  2,000 people made up of sponsors, the teams and invited guests, among others, will be allowed to attend the final at Moses Mabhida stadium on Saturday.