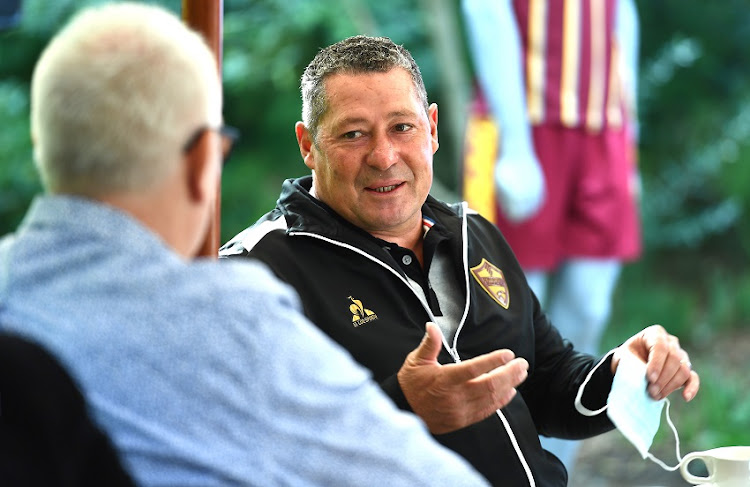 Stellenbosch FC head coach Steve Barker has showered his players with praise after their league win against struggling Marumo Gallants on Wednesday.

A delighted Barker said he was happy that his players stuck to the game plan from the first whistle and eventually won the match courtesy of a first-half strike from Ashley du Preez. The win saw the Winelands side rise to second place on the log, just three points behind leaders Mamelodi Sundowns, who have played a game less.

“I felt that we started the game well, we controlled the match and got the ball in good areas,” he said.

“We created chances, were able to get into our spaces and ask them questions, which led to the opening goal.

“Three wins in the row at home, second on the log, credit to the players for their continued commitment and efforts.

“They [players] are reaping the rewards of the work they are putting in.

“Credit to the [players], as the first half went according to the plans, but I felt that we let them have too much time and space on the ball.”

Barker said his charges learnt a lot from their mistakes last season and realised that failing to capitalise on opportunities early in the season often leads to fighting relegation later in the campaign.

“We had a good reflection during the preseason and we realised that we had to improve in many areas because we were giving away too many soft goals,” he said.

“Last season we didn't take our chances, but now there are huge improvements from the team.

“We went into the new season with a stronger and better mentality. I think the addition of players like Judas Moseamedi, Ashley du Preez and Solomon Letsoenyo has injected the speed upfront.”

Meanwhile, Gallants coach Mpho Maleka admitted that his side didn’t do enough to get a win against the clinical Stellies.

“We didn’t start the game the way we had planned, and with the positional switch you get strength and once you work on it you have something to work with,” he said.

“But we failed at that and it boils down to discipline.”

The Limpopo side are second from the bottom of the standings with just three points after eight games, and their next game is a tricky one against AmaZulu away on Wednesday.