Royal AM believe they can floor another Soweto giant 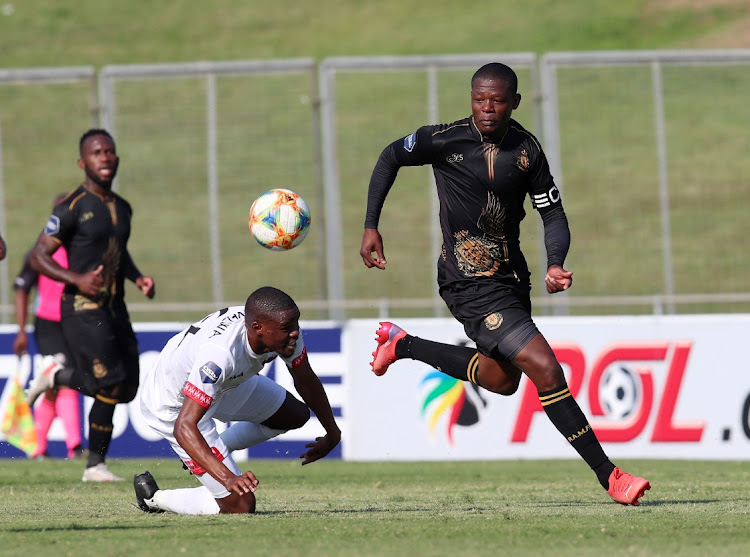 Ndumiso Mabena of Royal AM challenged by Zuko Mdunyelwa of Chippa United during the DStv Premiership 2021/22 match between Royal AM and Chippa United.
Image: Muzi Ntombela/BackpagePix

Having made a massive statement when they beat Kaizer Chiefs 4-1 this season, Royal AM feel they can do likewise with a victory against fellow Soweto giants Orlando Pirates at Orlando Stadium today (5.30pm).

Although coach John Maduka expects a different match from Pirates, he feels his side are capable of causing another upset. “Games are different, we play against Pirates and we know they are a very offensive team, so it is very important that we are tight at the back,” Maduka told Sowetan yesterday.

“Going forward, we still have to make sure we are cautious and balanced at the back because we know that with their speed and quick players, they can hurt us, so we must be able to balance going forward and defending.”

One thing for sure is, Royal will be up for a fight, having shown in their last two matches that they have a never-die attitude after scoring a winner against Maritzburg United and an equaliser against Marumo Gallants with the last kick of the game.

“We always play for the whole 90 minutes... So we keep on playing until the referee blows his whistle, he said.

“You could see in the two games against Maritzburg and Marumo... we scored very late in the match, so this is the belief we have that the game is not finished until it is over.”

While Pirates have not been convincing this season, with two wins so far, Maduka insists they will still give them the respect they deserve.

“Pirates are a good team. If you make a mistake, they can hurt you and if you look at our games, we have been conceding as much as we are scoring.

“You have to respect the opponent because if you don’t do that, they can hurt you; but at the same time, we must be ready to compete.”

Maduka also revealed they would have Ndumiso Mabena and Teboho Potsane back after recovering from their respective injuries.

The Buccaneers, on the other side, will be searching for their first victory in the DStv Premiership match since September 18 when they beat Chippa United 3-1 away.

Cape Town City skipper Thamsanqa Mkhize has made it known that as much as they respect Mamelodi Sundowns, they don’t fear them, banking on the tied ...
Sport
2 months ago

That he’s won just a single trophy in the top-flight doesn't sit well with Peter Shalulile. The Mamelodi Sundowns talisman is aspiring to take his ...
Sport
2 months ago

After the Premier Soccer League (PSL) confirmed that a total of 2,000 people would be allowed to attend the MTN8 final between Cape Town City and ...
Sport
2 months ago

Maritzburg United have moved up to second place on the DStv Premiership log after they defeated Marumo Gallants 1-0 at the Danie Craven Stadium on ...
Sport
2 months ago
Next Article