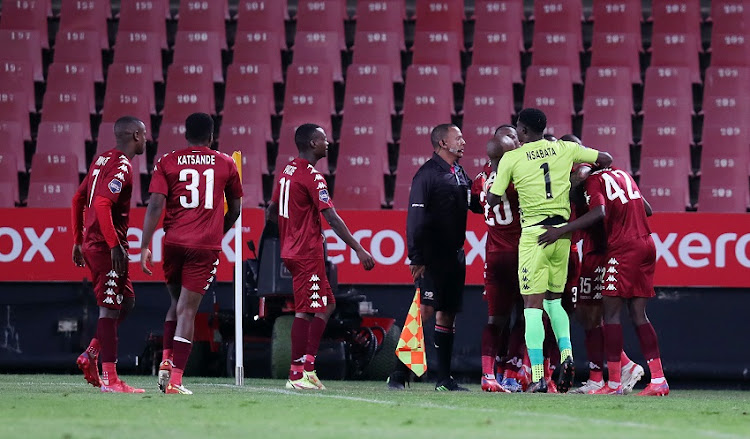 Chibuike Ohizu of Sekhukhune United celebrates a goal with teammates during the DStv Premiership match against AmaZulu FC at Ellis Park Stadium on October 27 in Johannesburg.
Image: Muzi Ntombela/BackPagePix/Gallo Images

Fresh from their remarkable victory over DR Congo giants TP Mazembe in the Caf Champions League at the weekend, AmaZulu FC were brought down to earth by DStv premiership rookies Sekhukhune United, who beat them 2-0 despite playing the last 20 minutes with 10 men.

Usuthu surprised all and sundry in the African continent when they ousted Mazembe 1-1 on aggregate at the weekend to qualify for the group stages of the Champions League in their first appearance after they had finished second in the SA league last season.

But Sekhukhune ended all those celebrations when they took advantage of their dominance in the game to continue climbing up the Premiership log table with their win over Usuthu being the third in a row in the league.

Sekhukhune's win moved them to fourth place on the Premiership log with 14 points and five behind leaders Mamelodi Sundowns, who have a game in hand.

MacDonald Makhubela, the Sekhukune coach, had seen his charges wasting a numbers of opportunities in the first 45 minutes but after bringing on Vusimzi Mncube for Brandon Perusnath, things started to happen.

Katsande, who joined the newcomers at the beginning of the current season after a decade with Amakhosi, registered his first goal in Sekhukhune colours after being on the end of Leepile Tlotlo's corner kick which was flicked on by Pogiso Mahlangu.

Sekhukhune doubled their lead when their front men, Tshediso Patjie and Ohizu, combined to catch the hapless visitors on the counter.

There was chance that Usuthu would  make a comeback when Mahlangu was ejected from the game by referee Masixole Bambiso for a dangerous foul on goalkeeper Veli Mothwa.

Possibly jet-lagged and fatigued after their trip from the DRC where they produced the historic victory while playing on an artificial pitch, AmaZulu never recovered and did little to really test Sekhukune's goalkeeper Toaster Nsabata.

The defeat leaves McCarthy's side eighth on the log and nine points behind Sundowns.

The Durban club will have to improve on many fronts in their coming matches if they are to  repeat what they did last season, finishing second in the Premiership to earn a ticket to represent SA in the Champions League.