'He won't be the first player to leave us' 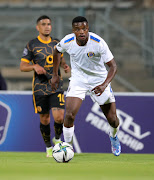 SuperSport United coach Kaitano Tembo has maintained he’s not fazed by the prospect of losing midfielder Teboho Mokoena, pinning his hopes on Diski Challenge graduates to take the baton from the 24-year-old Bafana Bafana ace.

During his engagement with the SA Football Journalists Association (Safja) last week, SuperSport chief executive Stan Matthews indicated they were willing to sell Mokoena when the current season concludes.

In the past two seasons, Mokoena has been heavily linked to Mamelodi Sundowns and Kaizer Chiefs. Tembo has sounded rather relaxed about the possibility of losing Mokoena next season, highlighting they’ve already started grooming a few youngsters to take over from him.

“If he [Mokoena] leaves, he won’t be the first player to leave SuperSport. Players have been leaving and we still had replacements and he’s no different. We will bring in a few youngsters who’re already training with the first team,’’ said Tembo post their 2-1 defeat, their maiden in the league this season, to Kaizer Chiefs on Sunday.

“On the bench today [against Chiefs] we had Thalente Mbatha, he’s another midfielder as well [he’s 21 years old]. There’s also Selaelo Rasebotja (20)… another midfielder who plays for our Diski team. Those are players which we are looking at giving game time to prepare them for next season, so it’s not really a concern for us.”

Even so, Tembo stressed the importance of focusing on the current season instead of starting to look at next season’s eventualities. The Matsatsantsa mentor still wants Mokoena to stay concentrated as he’s still a SuperSport player.

“For now, we’ve got to focus on this season, that’s very important. As much as we’re thinking about it [the prospect of losing Mokoena], at the same time it is key to underline that Tebza [Mokoena] is still part of us. We don’t want to be distracted by that [talks of Mokoena’s exit],’’ noted the SuperSport coach.

Speaking on their defeat against Chiefs at Lucas Moripe Stadium, where Bernard Parker’s brace was enough for the visitors to bag maximum points, Tembo lamented lack of intensity from his troops. The hosts’ goal was an own goal by Njabulo Ngcobo.

“I don’t think we played with intensity. When we had a ball, we were very slow,’’ said Tembo.