City tune up for Top8 with win 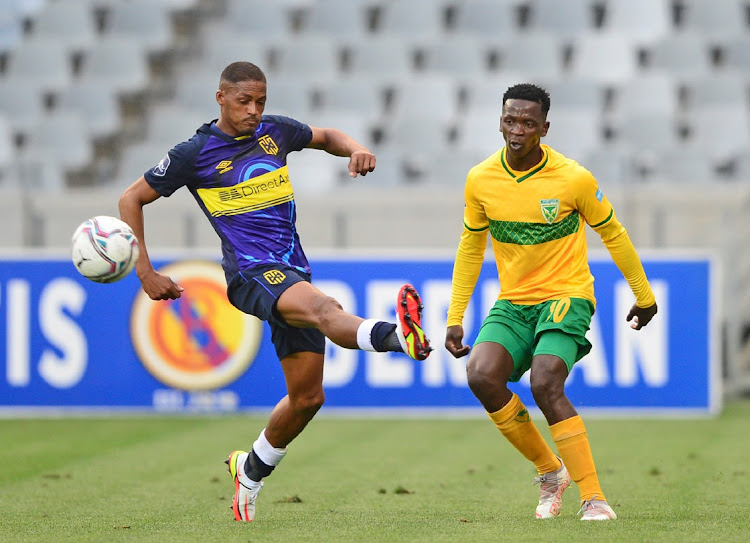 Sbonelo Cele of Golden Arrows clears as he is challenged by Craig Martin of Cape Town City.
Image: Ryan Wilkisky/BackpagePix

Cape Town City warmed up for the MTN8 cup final with a seven-goal thriller against Golden Arrows on Saturday, with the Citizens running 4-3 winners ahead of this weekend’s big clash against Mamelodi Sundowns in Durban.

Fagrie Lakay, Thamsanqa Mkhize, and Mduduzi Mdantsane scored to give the home side a 3-0 lead in the first half. Craig Martin made it 4-0 midway through the second half, but Eric Tinkler’s men then let their guard down.

Arrows fought back with goals by Pule Mmodi, Nkosinathi Sibiya, and Nqobeko Dlamini.

The home side held out for the win as the visitors nearly earned a point in the thrilling encounter.

The Citizens will play against Sundowns in the cup final at Moses Mabhida Stadium on Saturday (6pm).

Tinkler breathed a sigh of relief when the referee blew his final whistle as his side ended their three-game winless run in the league.

“We put on an exceptional performance in the first 45 minutes. We controlled the match in the first half. We were patient, moved the ball with speed, and created many chances. I was happy with our performance and told my boys to keep a clean sheet and not give anything away. We scored the fourth goal, and then everything fell apart,” said Tinkler.

He said losing Mkhize through injury allowed the visitors to get back into the game. “Unfortunately, his injury was a big loss. All their three goals came through the right side where he plays, and we defended for our lives in the end. The win was important leading into the cup final,” he added.

Arrows coach Lehlohonolo Seema praised his boys for their never-say-die attitude and said they were unlucky not to earn a point in the end.

“We cannot blame the boys. They were a little bit sharper than us and punished us in the first half. At 3-0 down, we were dead and buried. We could have got a draw. The boys fought, and we were unlucky and next time we have to attack from the onset and not wait until we concede goals,” said Seema.

South African football is floating on a purple cloud of continental success after two domestic sides cruised into the all-important  group stages of ...
Sport
6 months ago

Chippa United's inability to find the back of the net reared its ugly head again as they played to a dull, goalless draw against fellow basement ...
Sport
6 months ago

Orlando Pirates co-coach Mandla Ncikazi has expressed frustration at the lack of communication between the Bafana Bafana technical team and DStv ...
Sport
7 months ago

TS Galaxy defender Ebrahim Seedat believes his side desperately need some inspiration to start to get their DSTV Premier League campaign on track.
Sport
7 months ago
Next Article