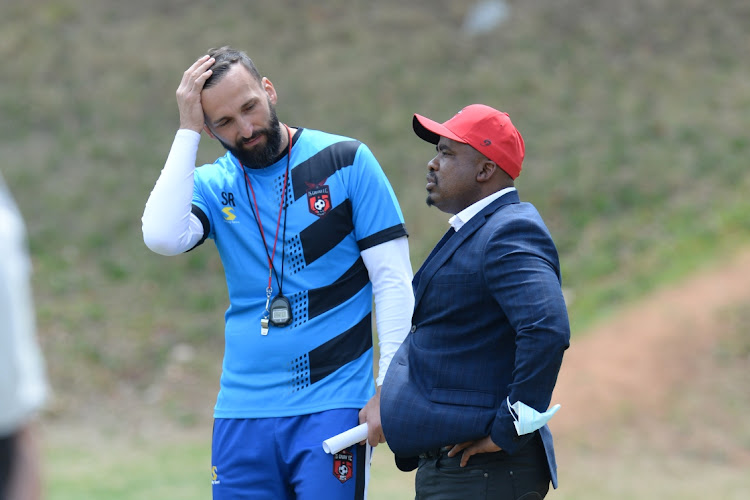 TS Galaxy coach Sead Ramovic has lauded the character of his players despite the 1-0 defeat to AmaZulu in the DStv Premiership match at Mbombela Stadium on Tuesday.

It was Ramovic's first match in charge since he replaced Owen da Gama, who left the club last month.

The Rockets lost through a second-half strike by Luvuyo Memela, but the German mentor was satisfied with the character his players showed.

“If you have to play against a team like AmaZulu, you have to stay strong and compact always. I think we did well,” Ramovic explained to the media.

“The only bad thing we did was we didn’t score the goals but I’m really proud of my team because I think we played very well. We had a structure and we had tactical things and we improved very well.

“We still need some more time to improve the team and we will do that. The other thing is that the red card [to Pogiso Sanoka] many teams will drop down, but we didn’t and that made me proud because they showed a lot of character.

“I think we didn’t deserve to lose; at least a point would have been fair, but that’s how football goes. If you are down, then you don’t have luck.

“We made a small mistake and we conceded the goal. We will try to do better in the next game.”

Galaxy are bottom of the log standings but Ramovic feels they have enough quality to turn their fortunes around. They will visit Maritzburg United in their next match on Saturday, where they will be searching for their first win.

“We have a great squad with 24 good players and I’m sure we will find the right team to play a great match against Maritzburg,” he said.

“It will not be easy at Maritzburg, playing against a German coach [Ernst Middendorp] but we have to believe in our quality and have confidence and I’m sure we will improve.

“Middendorp is known as a great coach and it won’t be easy but again, it won’t be easy for them to play against us. This is our main goal. We have to focus on our game and do better. I hope that we will start collecting some points soon.”

Uganda coach Milutin "Micho" Sredojević claims there is a "well-rchestrated plot" to humiliate him and tarnish his image after he was handed a ...
Sport
7 months ago

Fitness trainer Simone Conley insists she was sacked by TS Galaxy: 'I did not resign'

Former TS Galaxy physical conditioning trainer Simone Conley has disputed the club's claims that she resigned from the Mpumalanga side and insists ...
Sport
7 months ago

Sundowns to refresh team against Arrows due to punishing travelling schedule

Mamelodi Sundowns coach Manqoba Mngqithi has said they will refresh the team to take on Golden Arrows in a DStv Premiership encounter at the Sugar ...
Sport
7 months ago
Next Article