Duo now focus on Chiefs encounter at the weekend 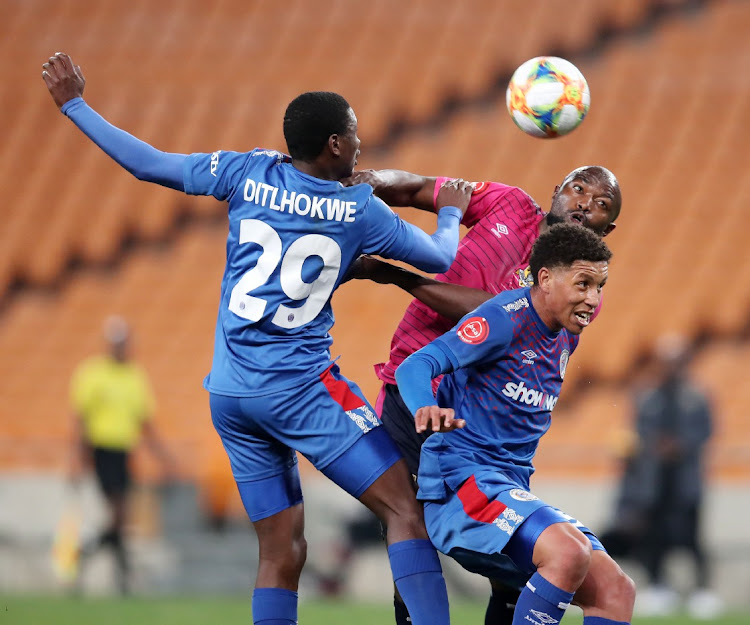 Thatayaone Ditlhokwe has explained how his partnership with Luke Fleurs at the heart of SuperSport United defence has been solid this season.

Matsatsantsa a Pitori have only conceded twice in seven matches this campaign, with Botswana international Ditlhokwe and Fleurs forming a solid partnership.

The two have also received praise from coach Kaitano Tembo, who is impressed with how fast they adjusted to playing together. “I can say it is something that has been there for a long time, like from last season. I was with him,” Ditlhokwe told Sowetan.

“We were lapsing there and there, but a player grows by giving him game time. So our coach has put his head on the block and he trusted us last season even though we were young players who were coming up and that helped us a lot because even at training, he pushes us.

“Now we have reached that level whereby we have stopped those schoolboy errors we did last season and the understanding also is growing every time. We have almost two years together and that on its own has brought that experience and communication and knowing each other better where you can cover for others’ weaknesses.”

The 23-year-old Fleurs has also managed to keep veteran Buhle Mkhwanazi on the bench.

“If you put hard work in everything, there is always a result. So I’m glad we are doing well, but it is not yet over,” he said. “This is just the beginning because it is not how you start but how you finish. We must just put our heads down and continue working hard so we can finish well.

“The coach dedicated his time and focused on us and made sure we correct those errors and become mature in how we can defend better, not just throwing ourselves and committing unnecessary mistakes.”

The two will have their work cut out trying to contain Khama Billiat and Keagan Dolly when SuperSport host Kaizer Chiefs in the DStv Premiership match at Lucas Moripe Stadium on Sunday (5.30pm).

Billiat and Dolly combined to help Chiefs beat Chippa United 4-0 on Saturday, but the Botswana international says they will have a plan.

“We have been watching them for a long time and we played against them before. We know what they can do and what not to do. So it is all about focusing and working hard so that at the end of the day, we can perform better. We are not Chippa United."

Ellis not taking Mozambique for granted

Banyana Banyana coach Desiree Ellis has stressed the significance of starting their journey to secure a spot in next year’s Africa Women’s Cup of ...
Sport
8 months ago

After scoring his first hattrick in his professional career with Pretoria Callies during their 6-1 victory over Cape Town Spurs on Sunday, striker ...
Sport
8 months ago

Three players claiming to be owed salaries by Marumo Gallants have taken their fight with the embattled club to the PSL dispute resolution chamber ...
Sport
8 months ago
Next Article