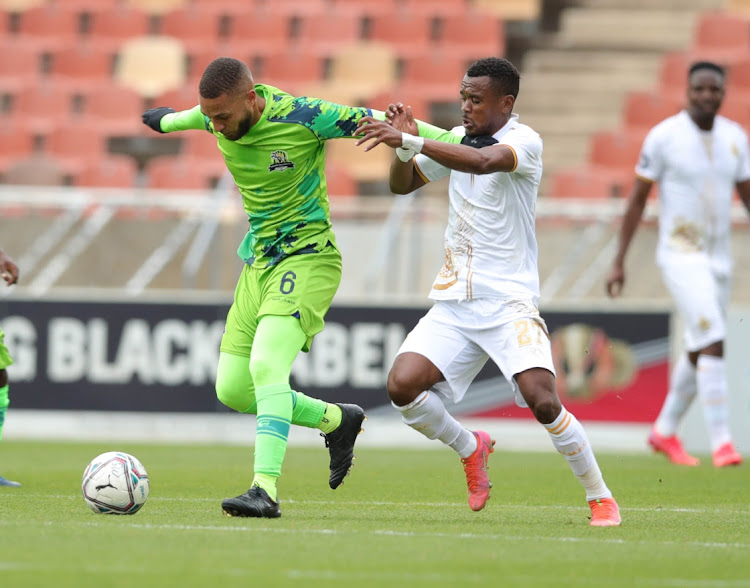 Miquel Timm of Marumo Gallants challenged by Harris Tchilimbou of Royal AM during the DStv Premiership 2021/22 match between Marumo Gallants and Royal AM at Peter Mokaba Stadium last night.
Image: Samuel Shivambu/BackpagePix

Marumo Gallants have no one but themselves to blame for failing to register their first DStv Premiership win after they squandered a two-goal lead to draw 2-2 against Royal AM at the Peter Mokoka Stadium yesterday.

Ndabayithethwa Ndlondlo scored three minutes into the second half, and Letsie Koapeng doubled the home side’s lead in the 73rd minute.

The visitors fought back with a penalty from their star player Victor Letsoalo in the 76th minute. Sedwyn George rescued a point for Royal with the last kick of the game in the 94th minute to force a share of the spoils.

Gallants assistant coach Mpho Maleka said the draw felt like a loss as his team conceded a goal right at the end of the game.

“We are disappointed with the result. What happened at the end hurt us. We came into the game with a proper game plan. We followed the plan and scored two goals. We controlled the game, and they didn’t hurt us until they scored in the last minute because we lost concentration. We are disappointed,” said Maleka after the game.

Maleka said they have to work on their concentration level and learn from this setback.

“Our problem is lack of concentration. The boys played well, and yes, we are disappointed, and the draw feels like a loss. We are the ones to blame, and we have to learn from this,” added Maleka.

“It was a tricky game, and we knew they would come at us. We absorbed the pressure and took our chances.

"We kept on pushing forward. We are happy with a point. I am proud of the boys for not giving up until the last second,” said Maduka.

Orlando Pirates' senior official Floyd Mbele has confirmed there will be no spectators when they face CSMD Diables Noirs from the Congo in a ...
Sport
1 month ago

We can translate our Caf performance to the league, says Gallants coach Maleka ahead of Royal AM clash

Marumo Gallants coach Mpho Maleka was pleased to see his side overcome the DRC's AS Vita Club but feels that they still need to improve their defence ...
Sport
1 month ago