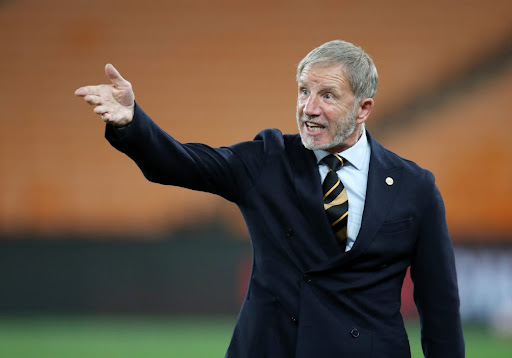 Kaizer Chiefs coach Stuart has said that they go into their must-win DStv Premiership match against Chippa United at FNB Stadium on Saturday feeling like they have a knife close to their throats.

Amakhosi host Chippa and their former coach Gavin Hunt, with both teams under pressure to win after a recent spate of poor results that have left them sitting at the bottom half of the table.

Twelfth-placed Chiefs are on a four-match winless run, which includes two draws and two defeats, while Chippa travel to Johannesburg looking for their first win in five outings.

Baxter said on Thursday that while there is increasing pressure on the side to get a positive result against the Chilli Boyz, it has been business as usual at Naturena in terms of their preparations for the match.

“It is business as usual, with the knives close to our throats I suppose,” he said.

The Briton conceded that this match has extra spice to it as his charges will be coming up against their former coach, and the reunion with Hunt will make an already intriguing fixture even more interesting.

“These games are great for the sponsors and the media but for me and Gavin (Hunt), we are professionals and we go into this as bitter enemies. We’ll go in and do our jobs, and then shake hands afterwards whether it is a win, loss or a draw.”

Baxter said both teams have started the season poorly and it is time to start getting points on the board.

“Both teams' seasons have not been what we have been looking for and people will talk up the ex-Kaizer Chiefs coach coming back to spoil the party and that sort of thing. I don't think Gavin is thinking that, I think he is thinking about the results and that is exactly the same with us. Like I said earlier, it is business as usual but everybody is feeling that knife close to their throats.”

With the team at the bottom half of the table, Baxter said the pressure is part and parcel of coaching a big club and he is not worried about what the critics are saying.

“I think every coach’s job is under pressure, that is the nature of the job these days. But the real pressure comes when the club you’re working for doesn’t see the culture that you are trying to promote and the learning that’s happening.

“That’s the real pressure, the social media and what people think changes so quickly these days,” he said.

“You question the fairness of that because there is that Tsunami nowadays on social media, but we have to ensure that we carry on with our job. I have to say that every coach is under pressure, that’s the nature of the job that we have.

“And sometimes we make good decisions and then other times we make bad ones. But we have to believe that in the real football world, not social media, you have more time and patience.”