About 2,000 fans witness own goal win it for SA 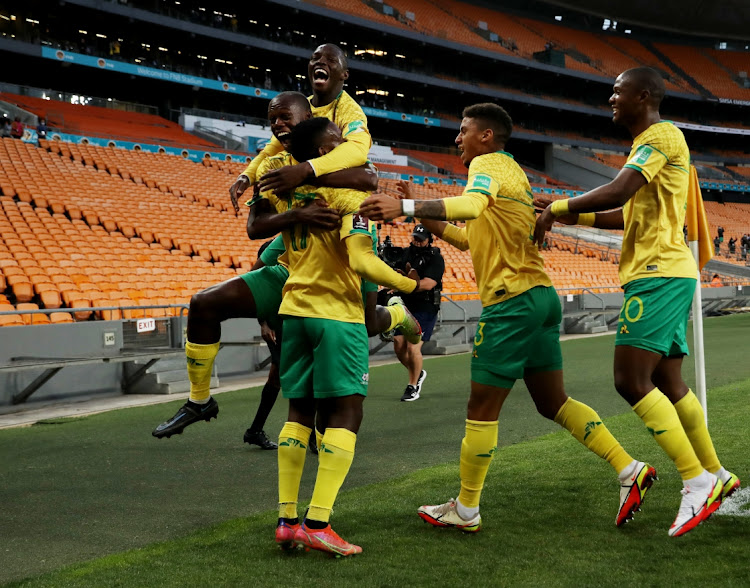 Bafana Bafana strengthened their grip at the top of Group G after they completed a double over Ethiopia following a 1-0 hard-fought victory in front of 2000 supporters at FNB Stadium yesterday.

They are now on 10 points after four matches, with Ghana second on nine. For the first time in 18 months, supporters returned to the stadium yesterday and brought the vibe and excitement which was missing since the coronavirus-induced lockdown in SA was declared in March last year.

Despite playing in front of their supporters, it was not the best of performances from the home side, but what was pleasing is that they got the job done by getting the result.

An own goal by the visitors' captain Getaneh Kebede was the decisive moment as it handed SA the much-needed win, especially as Ghana had won 1-0 in Zimbabwe earlier on the day.

Ethiopia will feel they deserved something out of this match as they dominated the better part of it.

Ngcobo was deployed in the central midfield rather than his centre-back. He was partnered with Teboho Mokoena as Broos looked to stop Ethiopia from winning the midfield battled and covering the back four. The pace of the game was high in the opening exchanges, but it was the home side that had a dream start with the match just 11 minutes old.

Maart delivered an in-swinging corner to the back post, which Letsoalo headed goal-bound and Kebede tried to clear but ended up putting the ball into his net. Looking for the equaliser, Ethiopia then started dominating and twice came close to finding the leveller, but Ronwen Williams was at his best again.

Just like in Ethiopia, the visitors were able to get behind Bafana's defence only for Williams to deny them the equaliser.

Despite a 1-0 lead, it was a shaky first half from the home side, who were losing possession. Ethiopia continued where they left off in the second half with Bafana happy to let them have the ball as long as they were not hurting them.

But despite being put under pressure, Bafana came close to increasing their lead, but Mokgopa’s effort was cleared off the line before the hour mark.

It was a nervy finish for the home side who were forced to defend too deep despite having chances to increase their lead. With Ethiopia and Zimbabwe now officially eliminated, Bafana now need at least a point in Ghana to win Group G and advance to the next round of the African qualifying competition for 2022 Qatar World Cup.

Bafana Bafana coach Hugo Broos has made four changes to the team to face Ethiopia in the crucial 2022 Qatar Fifa World Cup qualifier at FNB Stadium ...
Sport
6 days ago

Mashego living his dream in the Bafana camp: 'This is a big moment for me'

Bafana Bafana left-back Terrence Mashego says making his national team debut in the 2022 Fifa World Cup qualifier against Ethiopia on Saturday was a ...
Sport
6 days ago

Bafana Bafana may have beaten Ethiopia in their first meeting with the East Africans at the Bahir Dar International Stadium on Saturday afternoon, ...
Sport
6 days ago

'We made history,' says Bvuma ahead of Ethiopia showdown

Goalkeeper Bruce Bvuma has hailed the gutsy performance displayed by his Bafana Bafana teammates against Ethiopia in an away game a few days ago, ...
Sport
6 days ago
Next Article