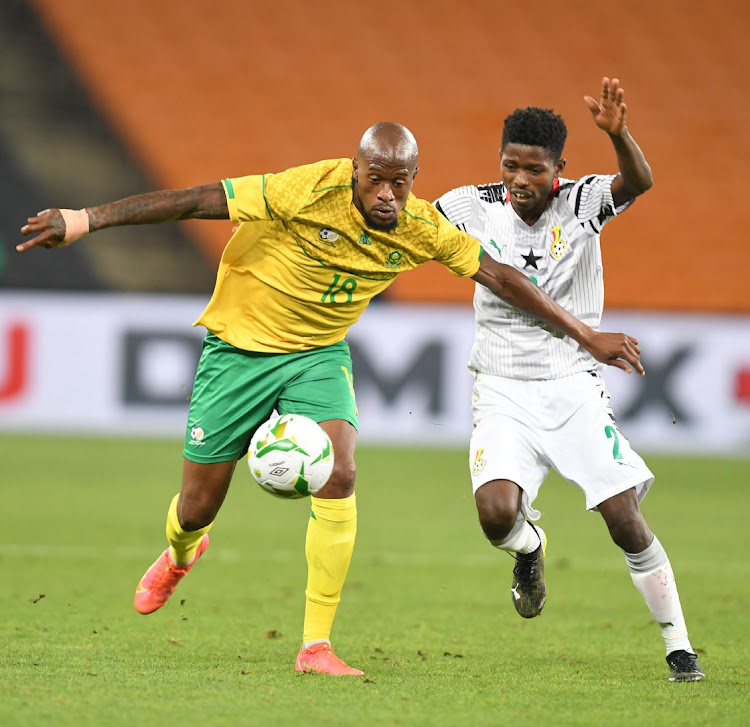 Bafana Bafana defender Sfiso Hlanti insists he will not be bothered if he starts on the bench against Ethiopia again in the 2022 Qatar Fifa World Cup qualifier at Bahir Dar Stadium tomorrow at 3pm.

In the last qualifiers against Zimbabwe and Ghana, Bafana coach Hugo Broos opted for Nyiko Mobbie at left-back and indications are that he is likely to continue with that.

“I don’t worry myself that much because I think the coach decided to choose two other left-backs [Mobbie and Terrance Mashego] and I will respect every decision that he takes,” Hlanti told Safa media yesterday.

“At the end of the day no-one has a contract with the national team. You play at that point in time, even though it’s a choice from the coach. I respect whoever is playing and Mashego is a good guy. He has been doing well and for me it’s about encouraging going forward because he still has a long way to go.”

The Kaizer Chiefs defender was impressed with the positive vibe among the players before their departure to Ethiopia yesterday. He feels this bodes well for tomorrow's game and the return match at FNB Stadium on Tuesday.

“It’s all up to us as players how we respond and from the beginning of the camp the boys were looking good and were looking sharp, so there is a positive attitude and the mentality is good,” he said.

“We need to go out there and show what we are good at and things have to go the way we want even though it will be difficult. Playing in Africa is always tough, but we have to be positive.”

The 31-year-old added that they would approach the match against Ethiopia without fear as they plan for back-to-back victories.

“For me, what matters most is not worrying much about the opposition teams. They are also a good side, they can play and they are a competitive team. They are willing to make things happen for themselves.

"We don’t need to be afraid to face challenges and that’s what matters the most because at the end of the day I always tell myself that whenever you go, you need to stand up and show what you are good at.”

Bafana Bafana may not have done well against Ethiopia in the two Fifa World Cup qualifiers before, but coach Hugo Broos spoke with confidence about ...
Sport
1 month ago

Gordon Igesund is backing Bafana Bafana to come back with positive results when they face Ethiopia tomorrow in the 2022 Qatar Fifa World Cup ...
Sport
1 month ago

Bafana Bafana captain Ronwen Williams says the camp is buzzing with positivity and excitement in a way he has never experienced before in his eight ...
Sport
1 month ago
Next Article