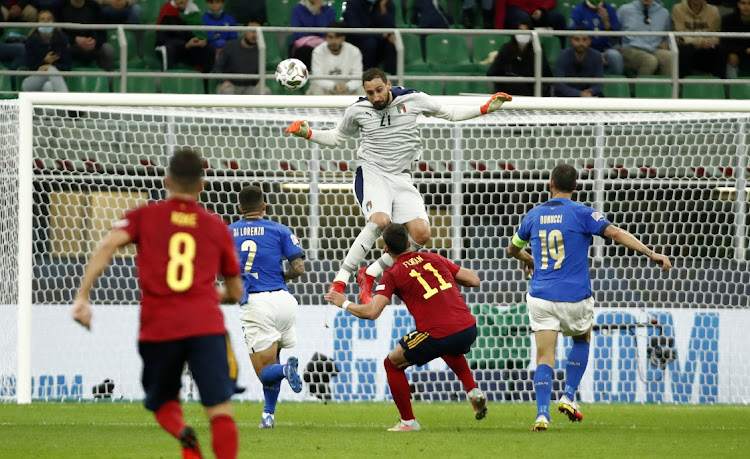 Milan - Roberto Mancini believes Italy’s first defeat in more than three years against Spain will make them stronger, but the manager was unhappy with the Milan crowd for jeering goalkeeper Gianluigi Donnarumma.

The European champions lost their Uefa Nations League semi-final 2-1 at the Stadio Giuseppe Meazza on Wednesday, ending a world record 37-match unbeaten run stretching back to 2018.

"It is better for it to come tonight than in the final of the Euros or the World Cup," Mancini told a news conference.

"But this game makes us even stronger despite the defeat and allows us to understand that we are truly a great team."

The Italians had home advantage on their side, but the San Siro crowd proved to be more of a hindrance than a help at times as Donnarumma was loudly booed with every touch.

The goalkeeper became an unpopular figure among AC Milan fans after refusing to sign a new contract and leaving the club to join Paris St Germain on a free transfer in July.

The situation seemed to affect the 22-year-old, who made a bad error in the first half when a shot squeezed through his hands and off the post.

"Italy were playing and it was not a club match," Mancini said.

"They could have put this situation aside for one night and whistle when it comes to a PSG-Milan game. Italy is Italy, and comes above everything else."

The Azzurri fell behind early to a Ferran Torres goal before suffering a disastrous end to the first half, as Leonardo Bonucci earned a second yellow card and Torres doubled Spain’s lead.

"On Bonucci’s red card, it was careless because it was a balanced game against Spain and it’s a regret because we were in the match," Mancini said.

"I do not blame the defeat on anything, but the red card affected the match," he added. "We were in a bit of difficulty, but we could have ended the first half at 1-1. We should not have conceded the second goal at the end of the first half."

An all-woman refereeing team will take charge of England's World Cup qualifier in Andorra tomorrow, with Ukraine's Kateryna Monzul in the middle and ...
Sport
1 week ago

Morocco romped to a 5-0 home win over Guinea Bissau in Rabat on Wednesday to go top of Africa’s World Cup qualifying Group I at the start of a busy ...
Sport
1 week ago

Germany's new coach Hansi Flick said he feels no pressure in carrying the expectations of his soccer-mad country on his shoulders with his team ...
Sport
1 week ago
Next Article