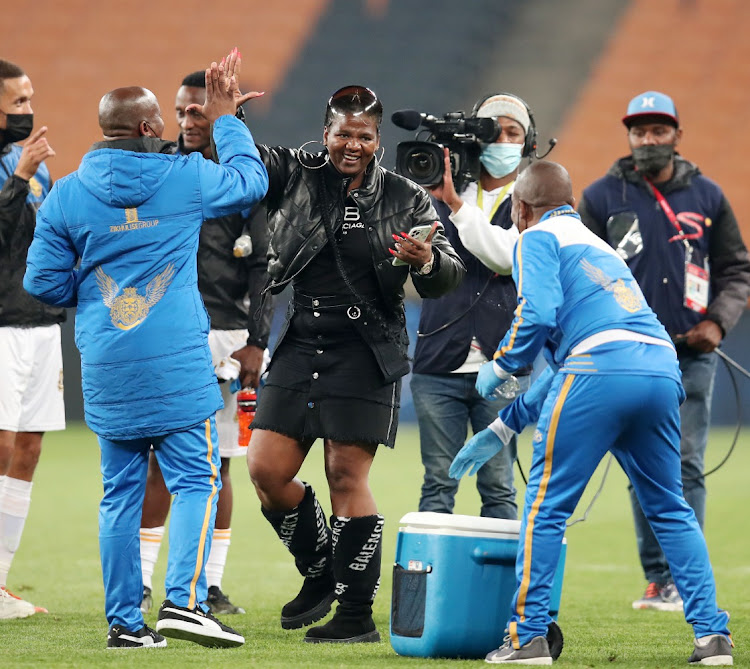 Shauwn Mkhize celebrates victory with Royal AM players during the DStv Premiership 2021/22 match between Kaizer Chiefs and Royal AM.
Image: Muzi Ntombela/BackpagePix

Like a parent who allows a child to constantly get away with misbehaviour, the Premier Soccer League (PSL) should shoulder most of the blame for Royal AM battering the league’s reputation in the past few weeks.

Royal’s latest indiscretion, when their officials shamefully dished out cash bonuses to players in front of rolling cameras after a win over Maritzburg United last weekend, could have been avoided had the PSL been firmer with the KwaZulu-Natal club’s previous waywardness.

For instance, when they openly defied an order to partake in the playoffs in June, all they copped for that major offence was a suspended fine. The club owned by one Shauwn Mkhize also dragged the league to court on numerous occasions, and made a mockery of our league by pitching for one match and then speeding off just before kickoff.

While fans and explicably the media, which desperately seeks appropriate content, remain barred by the PSL from stadiums, Royal have turned match days into some sort of a mini-party for the whole family and a horde of rowdy hangers-on, blasting loud music in the stands, with armed guards in tow.

But last week’s handing out of cash bonuses to players has to be their most reprehensible act, exposing the club as lacking in basic morals and foresight. Even the playing squad seemed embarrassed when they were called forward to receive the cash by one of Mkhize’s loudest, Gucci-wearing cheerleaders, who couldn’t even pronounce the players’ names correctly.

Mkhize and her cohort have come out to defend this ridiculous behaviour, telling us the money was aimed for “charity” rather than the players, which even primary school children would disbelieve. Handing over cash bonuses mid-pitch was nothing but a showoff, something people of MaMkhize’s ilk – those who accumulate wealth at the expense of the vast majority of our people – are so accustomed to. It was not about rewarding the players; it was all about getting the pictures, the likes, the retweets, and being the main topic on social media.

This, however, was done at a great expense of the league’s image. It took years to exorcise the ghost that the PSL was unprofessional, with some clubs accused of running their businesses like spaza shops. Jokes have long been thrown about regarding players receiving salaries from the boot of a car. Last week we saw Royal’s receiving it from a large brown envelope, mid-pitch.

Is this the image the PSL can take pride in? A league which attracts sponsorship income of over R1bn per season should do better.

At least the league’s prosecutor, Nande Becker, told us this week he’ll prefer charges against Royal. It’s about time. But previous experience warns us the league may just be bluffing. After all, when MaMkhize defied it in the first instance, all she got was a slap on the wrist and a reward with Bloemfontein Celtic’s status, on whose wave she and her disruptive entourage are riding today.

A harsher sanction is merited this time to end this circus once and for all. The miscreants can clearly be identified on that viral video, and should be given a lengthy ban from our stadiums. After all, the PSL has still not allowed in media who needs to access stadiums for work purposes. The disorderly “influencers” must go seek social media “content” from elsewhere.

Despite the criticism she faces with her club Royal AM, controversial owner Shauwn Mkhize insists she won’t change how she does things because of ...
Sport
1 week ago

Premier Soccer League (PSL) prosecutor Nande Becker has confirmed to TimesLIVE that he is going to charge the increasingly controversial ...
Sport
1 week ago

Royal AM owner Shauwn “MaMkhize” Mkhize hogged the headlines  way before she purchased Bloemfontein Celtic in August. Aside
Sport
1 week ago
Next Article