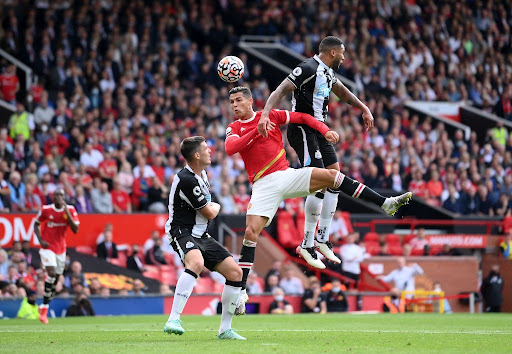 Cristiano Ronaldo of Manchester United jumps for a header with Jamaal Lascelles of Newcastle United during the Premier League match at Old Trafford on September 11 2021 in Manchester, England.
Image: Laurence Griffiths/Getty Images

Ronaldo rejoined United in the close season and has already scored five goals from six matches in all competitions despite the team's mixed start to domestic and European competitions.

"You know the star he is, what he has been doing over a number of years, it's just unbelievable to be in a dressing room with him," Shaw told the BBC.

"You see the way he conducts himself, how professional he is. It's clear to me why he has been at the top for so many years. His mentality is second to none.

"I think he has really improved that in and around the changing room."

United were held to a 1-1 draw by Everton in their last Premier League game and have 14 points from their opening seven matches in the competition.

They take on 13th-placed Leicester City in the league on Oct. 16 as action resumes following the international break.