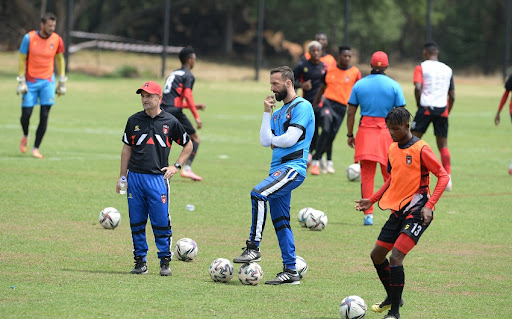 TS Galaxy are continuing to beef up their technical team with the appointment of Mensur Dogan as the new assistant coach.

The 50-year-old Uefa Pro Licence educator joins the Rockets on a three-year deal and has assumed his duties with immediate effect.

The club sacked head coach Owen da Gama after just eight months at the helm after a spate of poor results.

Club chairman Tim Sukazi explained the idea behind the appointment and said they intend to tap into the vast knowledge that the Bosnia and Herzegovina born-Dogan brings to the table.

“Mr Mensur Dogan has joined our club on good recommendation by our new coach, Sead Ramovic,” he said.

“He brings a wealth of experience as a Uefa Pro Licence football educator.

Among his many achievements, he helped unearth one of the best finishers in the world in former Manchester City striker Edin Dzeko, who is now employed at Inter Milan.

The veteran coach was a director of the youth academy at Bosnian outfit, FC Zeljeznicar Sarajevo.

“I am very happy to be here, but the results will make me even much happier,” he said.

“We want to make an impact at this beautiful club.

“Coach Sead is a good friend of mine and he asked me to come and add some value to the club.

“It is my first time here in Africa and I need some time to adapt and acclimatise.”