Players reveal they feel unsafe, claim this was not the first time 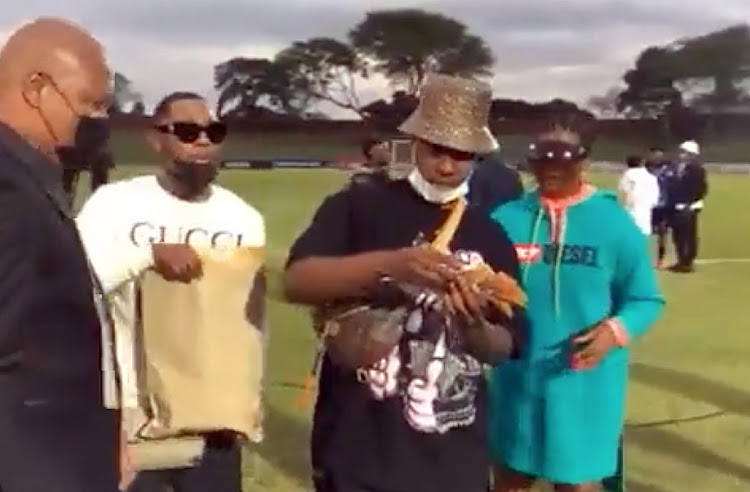 A screengrab of Shauwn Mkhize and her son Andile Mpisane handing out hard cash to the players at Royal AM following the 2-1 league win against Maritzburg United at Chatsworth stadium.
Image: Screengrab

The Premier Soccer League will throw the book at Royal AM after their latest stunt of handing out cash bonuses to players on the field after their 2-1 win over Maritzburg United at the weekend.

PSL prosecutor Nande Becker confirmed to Sowetan yesterday he was preparing to haul Royal over the coals for the embarrassing stunt, which saw the club’s officials celebrate victory by assembling players mid-pitch just after full-time to hand over the cash.

Sowetan has been told some players got as much as R10,000 which, if true, would mean the officials had around R200,000 in cash with them, creating a huge security risk around the PSL fixtures that involve the club owned by socialite Shauwn Mkhize.

A Royal player, speaking on condition that he was not named, confirmed the mood around their camp had been sullied by the stunt, even as the club won four matches in a row to be among the early, unlikely championship contenders.

“There are criminals who could have been watching and know where we stay,” the player said. “This has put our lives in danger as we are no longer free. They [criminals] will think we have that money wherever we go and will be quick to attack us.

“What they should have done is to deposit that money into bank accounts or wait for us to get to [the] dressing rooms and give it to us.”

Another player revealed that this was not the first time they received cash on the pitch. “It happened before while we were still playing in the GladAfrica Championship where we got money like this, but that didn’t go viral,” the player claimed.

Club CEO Sinky Mnisi declined to comment while Mkhize said she was in a meeting and couldn’t comment.

While her son and club chair Andile, who was seen carrying a huge brown envelope containing R200 notes, offered an apology on social media, the PSL all but confirmed it will prefer charges against the flamboyant team.

“Most definitely, we are looking at that. There are some confirmed charges already. I'm just waiting for a copy of the footage to confirm,” Becker told Sowetan.

“I don’t want to prejudge the matter but I would be preferring charges in due course once I have all the information. I don’t want to say any more because it could be more than one charge. So I need to do my homework first before I can say they will be charged for A, B and C.”

Meanwhile, one of the club’s sponsors, the eThekwini metro, said through its spokesperson, Msawakhe Mayisela, that the city had no business involving itself in the internal affairs of the club, claiming it also sponsored other teams including AmaZulu and Golden Arrows.

“We are not only sponsoring MaMkhize’s team. We sponsor everyone including the Sharks rugby team, but we cannot be told that the city must be interfering or be expressing its view in everything that happens to these teams,” Mayisela said.

Kaizer Chiefs coach Stuart Baxter has explained the reasons behind the decision to play Njabulo Ngcobo in a defensive midfield role.
Sport
3 weeks ago

Goodman Mosele is out of the Bafana Bafana squad to face Ethiopia in crucial back to back qualifiers for the 2022 Qatar Fifa World Cup next week ...
Sport
3 weeks ago

Health minister Joe Phaahla has welcomed the SA Football Association’s recommendation for the return of spectators to stadiums and has asked the two ...
Sport
3 weeks ago

Tinkler after City share the spoils with Pirates: ‘There’s a part in me that’s disappointed’

Cape Town City coach Eric Tinkler felt that on another night he would have been talking about all three points against Orlando Pirates, he said after ...
Sport
3 weeks ago
Next Article