Shalulile, Safranko and Maema on target as Sundowns sweep Swallows aside 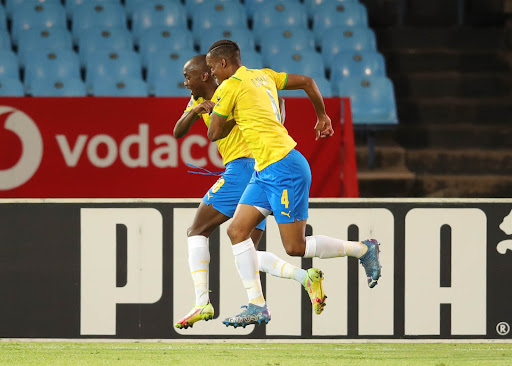 Champions Mamelodi Sundowns are four points clear at the top of the DStv Premiership after they beat struggling Swallows 3-0 on Sunday evening to maintain their unbeaten start.

Slovakian striker Pavol Safranko scored his first league goal to put Sundowns ahead after half an hour of action before Neo Maema and Peter Shalulile struck late in the second half.

Safranko rose in front and above Musa Nyatama to head home from a Lyle Lakay corner kick and Maema came off the bench to score his second goal in two matches while red-hot Nambian striker Shalulike scored his fifth goal on the trot.

It is still early on in the season but the champions are showing signs of the unstopable form they displayed in the previous campaign where they lost just one Premiership match and conceded 14 goals on their way to a record-breaking fourth league title last season.

They are yet to concede or lose in their opening six league games this season and have collected 16 points from a possible 18 to take an early lead and set their sights on an unprecedented fifth successive Premiership title.

It also means that Sundowns have lost only once in 36 league matches stretching from last season.

Swallows came into the match on the back of a poor run of form that saw them draw and lose twice in their last three league matches.

Swallows started brightly and forced a few good saves out of home goalkeeper Denis Onyango but the visitors fizzled out as soon as Safranko opened the scoring.

Swallows, who are without suspended head coach Brandon Truter and have been under the guidance of Simo Dladla in the last three matches, face an uphill battle.

They are on five points after six matches and sit in a precarious position in 14th on the log.

Truter is expected to be back on the bench when Swallows host high-flying Stellenbosch after the Fifa break on October 17 after serving suspension for reasons that the club did not disclose.

Sundowns will travel to Congo to face AS Maniema Union in the Caf Champions League after the international break.

Sundowns defenders Mosa Lebusa, who missed this match through a hamstring problem, and Rushine De Reuk will be joined by teammates midfielder Mothobi Mvala and striker Thabiso Kutumela in the 23-member Bafana Bafana squad that will assemble for camp on Monday.

Bafana take on Ethiopia in crucial back to back qualifying matches for the 2022 Qatar Fifa World Cup home and away on October 9 and 12.

Shalulile can’t stop scoring and will hope to continue to find his range when Namibia take on Sadio Mane’s Senegal in back to back qualifiers of the own.