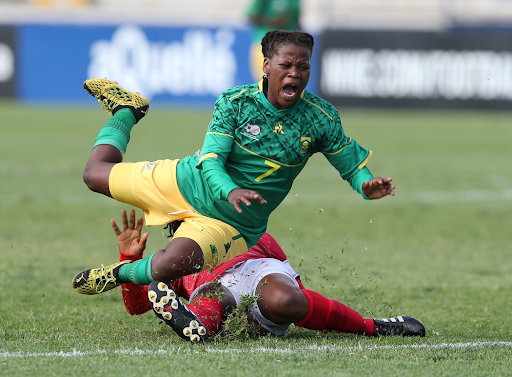 Banyana Banyana had to work themselves ragged to produce chances against a big, physical Angola, but then were wasteful in front of goal and had to settle for a 0-0 draw in their second 2021 Cosafa Women’s Championship match on Friday.

The committed South Africans had Angola increasingly stretch as the match wore on, their opponents finishing the game at Madibaz Stadium at Nelson Mandela Bay University in Gqeberha defending desperately.

But Banyana could not profit from their chances and add a second Group A win to their 2-1 victory against Malawi at Nelson Mandela Bay Stadium on Tuesday.

Banyana are seeking their fifth Cosafa Cup title in succession and a fifth, and eighth in all.

Angola came out looking dangerous when they probed, such was when, from playmaker Zeferina Caupe's corner, goalkeeper Kaylin Swart punched only as far as Zefera Evarista on the edge of the box whose connection on the volley with her knee looped onto the top netting.

Banyana had to move the ball to gain any form of territorial advantage against physical Angola, and as they did that the chances came.

Left wing Ntombifikile Ndlovu fashioned space on the lef6 of the area but struck into the arms of goalkeeper Sandrina Antonio. Midfielder Sibulele Holweni drove past the upright from a similar position.

Dangerous right wing Noxolo Cesane struck the side netting from the right.

Out from the break SA piled on the pressure, and continued to ramp it up until the final whistle.

Cesane stole the ball on the right of Angola's box and squared for Melinda Kgadiete to force a close-range stop from Antonio.

Angola remained a threat and Sara Luvunga's looping header from Caupe's cross kept out awkwardly under the crossbar by Swart.

Sesane's cross found Kgadiete to get in ahead of a defender and head a stop from Antonio.