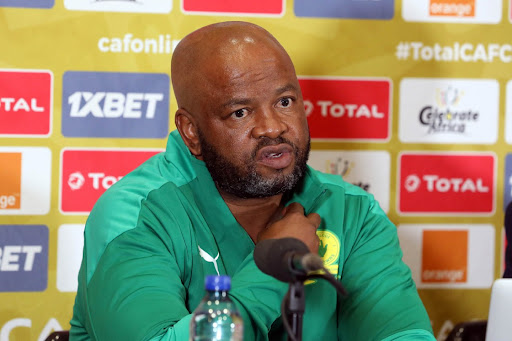 For all their domestic dominance over the past six years, Mamelodi Sundowns have surprisingly failed to lift the MTN8 trophy.

The Brazilians will take on Cape Town City in the final, at a date and venue still to be confirmed by the Premier Soccer League (PSL), and coach Manqoba Mngqithi says Downs will have to be careful of anxiety and desperation.

Sundowns last won this trophy in 2007 while it was still known as the SAA Supa8 when they defeated Orlando Pirates 1-0 in the final, and it remains the only trophy on offer that eludes the current generation.

“We are always very wary of that space but we have spoken a lot about anxiety and humility,” Mngqithi said when asked about the pressure of finally having the opportunity to lay their hands on the trophy.

“We have to remain focused because it is very important for us not to be all over the place, and we must try to make sure that we stick to our tactical arrangements.

“Everything that we put in from training we try to translate it into the match situations, and I think the players have done very well since the beginning of the season on that front.

“Obviously anxiety and desperation can always lead to a lot of mistakes but we have a team that is focused in knowing that we want to give it our best shot and ensure that we don’t make too many mistakes.”

Mngqithi added that it was Sundowns' plan this campaign for the current crop of players to try to win this competition so that they leave a legacy.

“It is our target and the message was very clear from the beginning from all of us as coaches that this crop of players must always make their own legacy, because they have a responsibility to the club and the fans.

“To others the MTN8 may not be a prestigious trophy but to us and the new generation of [Sundowns] players it will be very important for them to say we won the MTN8 cup that was elusive for so many years.

“It was very important for our players to come into this match and to know that we must put this team in the final. And when you are in the final at that time we will be talking about making sure that they create a legacy for themselves.

“We have not won the MTN8 since 2007, so it was important from everyone to be hungry and we want to tread carefully by putting our foot on the ground and not to lose focus at any stage.”