Sundowns storm into MTN8 final with stunning win over Arrows 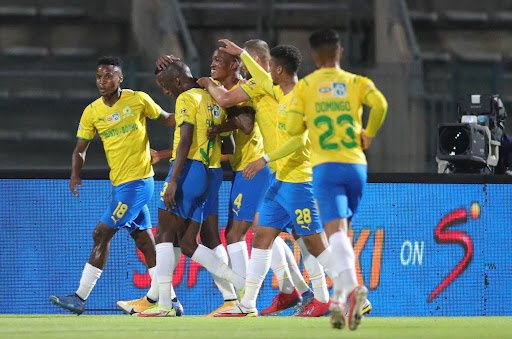 Divine Lunga of Mamelodi Sundowns celebrates his goal with teammates during their MTN8 semifinal match against Golden Arrows at Lucas Moripe Stadium on September 28, 2021 in Pretoria
Image: Samuel Shivambu/BackpagePix/Gallo Images

Mamelodi Sundowns have booked a place in the MTN8 final after a dominant 3-0 win over Golden Arrows in the second leg of their semifinal match at Lucas Moripe Stadium on Tuesday night.

Sundowns advanced to the final with the aggregate score of 4-1 after a win that was secured through first-half goals by on-form striker Peter Shalulile and defender Divine Lunga.

With this win, their fifth in all competitions so far this season, the Brazilians will play the winner of the other semifinal between Swallows and Cape Town City at Dobsonville Stadium in Soweto on Wednesday.

For all their recent domestic dominance, Sundowns never lifted the MTN8 trophy in its current guise and their last win was when they beat Orlando Pirates 1-0 in 2007 while the competition was known as the SAA Supa8.

It is also worth noting that after this result, Sundowns have only conceded three goals after eight matches in all competitions this season while they have found the back of the net 15 times.

Sundowns opened the scoring as early as the fourth minute when Arrows goalkeeper Sifiso Mlungwana spilt a snap shot by impressive Kutumela on the path of Namibian international Shalulile, who made no mistake.

In what was Shalulile’s second goal of the tournament, Sundowns cut through the Arrows midfield with a delightful move that also involved Themba Zwane, Andile Jali and Haashim Domingo.

Arrows did not take Sundowns’ opening goal lying down as they responded with an immediate counterattack of their own resulting in attacker Velemseni Ndwandwe forcing a diving save from Reyaad Pieterse.

It was a rare start for Pieterse between the sticks with Ricardo Goss named on the bench in the absence of Denis Onyango and Kennedy Mweene, who were named among the injury casualties.

The Brazilians, who completely controlled the early exchanges, tightened their grip on the match with the second goal that was headed home by Lunga, who outjumped Ndwandwe in the box.

Lunga, who was on his first start for the Brazilians since he joined them during the off-season, did not celebrate his goal in respect to Arrows who recruited him from Chicken Inn of Zimbabwe in 2018.

It could have been worse for Arrows just before the break when Kutumela, who contributed two assists in the opening half, watched in disbelief when his header from Domingo’s cross hit the upright.

There were no goals in the second half but Arrows notably improved their attacking tempo with the likes of Michael Gumede, Ndwandwe, Pule Mmodi and Nduduzo Sibiya creating most of their chances.

One of the most notable moments of the second half came in the closing stages when Pieterse and Arrows captain Nkosinathi Sibiya were stretched off the field after a nasty clash of heads.

The last act of the night was a stunning long-range goal by substitute attacker Neo Maema as the Brazilians stormed to the final in sensational style.