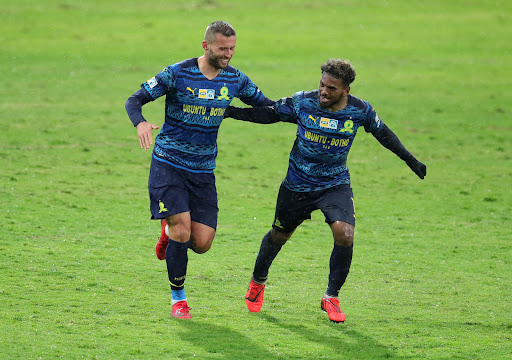 New Mamelodi Sundowns European striker Pavol Safranko is yet to establish himself in the star-studded squad and has not started a match so far, but co-coach Manqoba Mngqithi said the technical team is happy with the Slovakian’s work ethic and progress.

The 26-year-old has featured as a substitute in all six matches he has played in all competitions since he joined Sundowns at the start of the season, but has already scored an important goal for the Pretoria side.

He came on as a second-half substitute to score his first goal in SA, a late equaliser in the first leg of the MTN8 semifinal against Lamontville Golden Arrows that ended 1-1 last month.

Mngqithi said Safranko must continue to work hard to earn a starting place and be patient.

“He has done well, works very hard and gives us what we want, but we can’t just give the line-up to him when Peter Shalulile is doing well and when Kermit Erasmus has been doing well,” said Mngqithi.

The Sundowns coach said Safranko is scoring goals for fun at training and that he hopes it is only a matter of time before the striker starts finding his range on match days.

“He must fight for it and whenever he gets an opportunity to start a game he will give it his best shot.

“We are happy with the progress that he is making and in training he is looking very good and scoring a lot of goals for us.

“We believe we have got a very long season and he is probably going to help us as we go along but the truth is at this stage we also want to try and see where we can give him an opportunity to start a game.

“The progress he is making is really amazing and we are happy.”

Lethal Namibian striker Shalulile is the first-choice striker and has already banged in five goals in seven matches in all competitions.

Safranko still has competition from other forwards like Erasmus, Thabiso Kutumela and Gift Motupa.

Sundowns take on Lehlohonolo Seema’s Arrows and Mngqithi said ahead of the match there will be just a handful of changes from the team that beat Orlando Pirates 2-0 in the league over the weekend.

“We can still start with the same team that started against Pirates. It will depend on what we feel as coaches and also the advice from the medical team.”

Sundowns need an outright win to advance to the R8m tournament final where they will meet the winner of the match between Swallows and Cape Town City.

Swallows will host City in the second MTN8 semifinal match in Dobsonville on Wednesday under pressure after they were held to a goalless draw in the first leg in Cape Town.