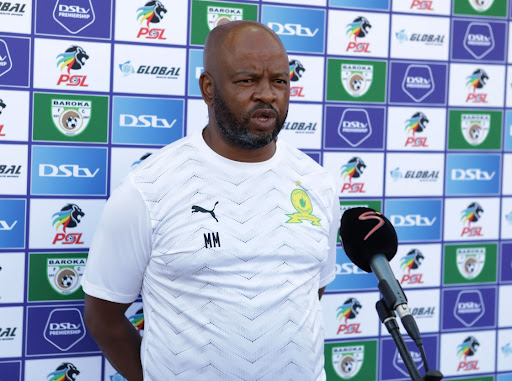 Manqoba Mngqithi has said Mamelodi Sundowns' MTN8 ambitions have over the years always been sidetracked by more pressing events, such as the Caf Champions League. But he believes that the club can now finally lay its hands on the R8m trophy with fewer distractions this time around.

Sundowns have won every domestic and continental trophy on offer since the days of former coach Pitso Mosimane but the winner-takes-all cup tournament has eluded them.

Sundowns have a plucky Lamontville Golden Arrows standing in their path to the final but have the upper hand in the two-legged semifinal after they scored a vital away goal when the two sides played to a 1-1 draw in the first leg in Clermont.

Ahead of the second leg in Atteridgeville on Tuesday, Mngqithi went to great lengths to illustrate how and why the MTN8 trophy has eluded Sundowns.

Sundowns are oozing confidence after a blistering start to the Premiership season with four wins and a draw in their opening five matches.

Mngqithi was asked if Sundowns' relatively lukewarm starts to the new season over the years has any bearing on their MTN8 shortfalls.

‘Arrows can up their game anytime’ - Mngqithi

“I would not say we normally start badly because when I look at the records, in many seasons we have notched around 11 or 13 points in the league (in the first five games),” said Mngqithi.

They go into Tuesday’s MTN8 second leg semifinal against Lamontville Golden Arrows in Atteridgeville with their away-goal advantage, and also can boast 13 points out of a possible 15 in the Premiership.

“But in the MTN8 we have kind of struggled to pull it through. I remember a few games where we bombed out at Platinum Stars because maybe we were trying out new combinations too early in the season and that caused problems for us.”

Sundowns lost in the final in 2016 against Wits the year they won the Caf Champions League, and crashed out at either the semifinal or quarterfinal stages since then.

“There are some scenarios where we bombed out against Wits in the final at that stage the Champions League was in the semifinal stages.

“I think we were playing Zesco United in that space, and we did not have the legs because there was also a lot of travelling during that time.

“I also remember in the semis against Cape Town City we did very well but were unfortunate as some decisions did not favour us and unfortunately we bombed out at the semis.

“So I would not say we have always generally started badly but in the MTN8 I would say we have had different scenarios that have stopped us lifting the trophy.

“So we must tread very carefully and make sure that we give all the focus that is necessary.”