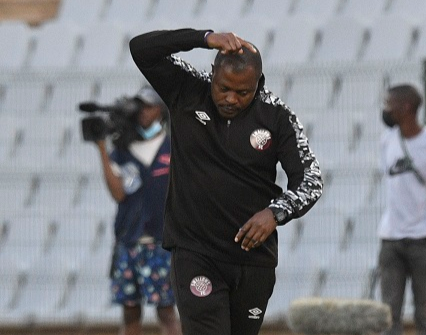 Swallows FC assistant coach Simo Dladla has said the decision that he would take charge of the team for a period came after a “lengthy meeting” between head coach Brandon Truter and the club's management.

Dladla suggested his time in charge has been set down as two matches.

As the club has refused to divulge the exact reasons for Truter's “leave”, other than referring to “personal reasons”, pieces of the puzzle continue to emerge ahead of Wednesday's MTN8 semifinal, second leg at Dobsonville Stadium. The first leg in Cape Town a month ago ended 0-0.

Reports have alternately been that Truter has been placed on leave or suspended by Swallows.

Official word from Swallows has come from chair David Mogashoa, who said Truter is “on leave”, and is “definitely coming back”.

Dladla, who took charge of Swallows' 0-0 Premiership draw against City at Dobsonville on Friday, was asked how the uncertainty surrounding the technical team has affected Swallows' squad, and if the situation has at least been fully explained to the players.

“What actually happened was that coach Brandon had a lengthy meeting with the club's management, and after that meeting I was called in to be told of the decision that both parties had reached to say that I would take control of the two games. And that was taken across to everyone,” Dladla said in Tuesday's pre-match press conference for the second leg against City.

“Of course you would expect that people were shocked, and it would take time to sink in. It was a difficult task, and still is, to get everyone on board in terms of the way forward.

“But in the past few training sessions we have been looking at the players who really want to play and make a difference, who realise that we have a problem, [which is that] we are not winning games. And everyone is trying to fit in and get the team into the right direction.”

Dladla was asked to clarify his post-match statements to Sunday's league draw that he was “trying to bring a new structure and philosophy with the games I've been given”.

“I have a very good working relationship with coach Brandon. Obviously I support his ideas and methods,” Dladla said.

“One member [of the media] just mentioned now we have gone so many hours [450, or five matches] without scoring. I have a different way of doing things with regards to that as a person.

“That does not say we did not share the same ideas in terms of how we see the game.

“Because the philosophy for me is just about behaviour in certain moments. Behaviour on the ball, off the ball; behaviour in the final third, middle of the park and at the back.

“So that's what I meant. But in essence we have a very good relationship. And of course as his assistant I have to rally behind him in what he feels is right for the club.”

Truter’s leave came after successive defeats against Orlando Pirates (1-0) and SuperSport United (3-0). In all the Birds had won just four times in 27 league and cup matches when the coach went on leave.