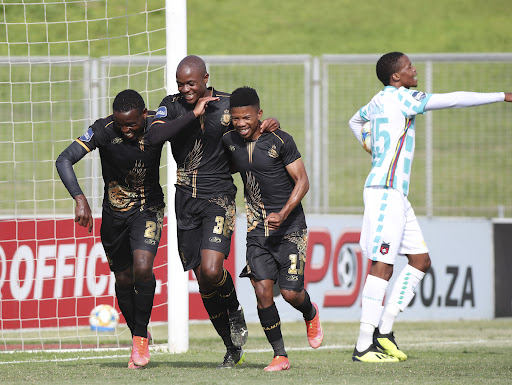 Levy Mashiane is flanked by his Royal AM teammates as they celebrate the team's second goal of the match.
Image: ©Gavin Barker/BackpagePix

Victor Letsoalo scored his fourth league goal in three matches as Royal AM stormed to a second successive DStv Premiership win after they crushed TS Galaxy 4-2 on Sunday afternoon.

Three first half goals from Tshidiso Monamodi, Levy Mashiane and Letsoalo overwhelmed Galaxy and while the visitors scored twice in the second half, through Pogiso Sanoko and captain Mxolisi Macuphu, Kabelo Mahlasela added another strike for Royal to complete the rout.

It was Royal’s second successive match where they put four goals past their opponents after they beat Kaizer Chiefs 4-1 in Soweto last week.

Monamodi put Royal ahead as early as the fourth minute and the visitors’ problems were compounded three minutes later when Galaxy right-back Marks Munyai was shown a straight red.

Mashiane scored a goal of the highest class to double the lead for Royal and Galaxy were always going to find it hard to come back.

With two goals and a man down after half an hour of action it meant that they played with their backs to the wall for the next remaining hour.

It was curtains for Galaxy when Letsoalo tapped home from close range with a minute remaining before the halftime break to make it 3-0.

Royal moved to fourth place on the log with nine points from six matches and trail champions and leaders Mamelodi Sundowns by four points while SuperSport United and Stellenbosch occupy second and third spots respectively on 11 points.

Owen Da Gama rang the changes at halftime as he tried to claw his team’s way back, and while they had a goal incorrectly ruled out and forced several saves out of home keeper Patrick Nyame, Galaxy were always behind in the match and could only manage two consolation goals.

No Premiership coach has been fired so far but Da Gama will start feeling the pressure as he only has two points to show from his opening five league matches this season.

His side remain the only team along with bottom club Marumo Gallants yet to win a match and the 60-year-old coach has a week to turn things around ahead of their next league match at home against Sekhukhune United at Mbombela Stadium in Nelspruit on Saturday.

Coach John Maduka and his Royal charges will be determined for a hat-trick of wins when they host KwaZulu-Natal rivals Maritzburg United the next day on Sunday before the Premiership breaks for the next two weeks for the Fifa international window.