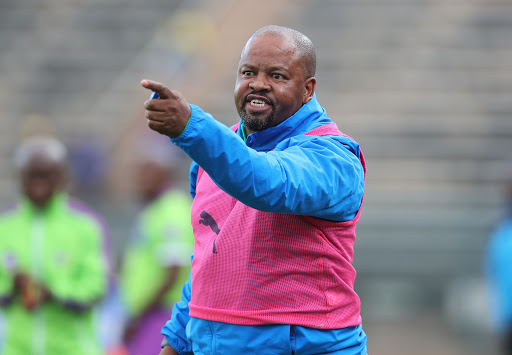 Mamelodi Sundowns coach Manqoba Mngqithi is pleased with the attitude of the players.
Image: Gavin Barker/BackpagePix

Mamelodi Sundowns coach Manqoba Mngqithi has praised his players for their professional attitude at training as they prepare to face Orlando Pirates in Saturday's crunch DStv Premiership clash.

The Brazilians and the Buccaneers meet at Orlando Stadium in Soweto with the two teams enjoying a good run of form having both won their last two matches and yet to lose in the league so far this season.

Defending champions and current pacesetters Sundowns have won three of their four matches, while Pirates boast two wins and as many draws since the season started.

“The boys have worked very hard, they are interested and their attitude in training has been exceptionally good,” said Mngqithi.

“There is the willpower from the players to make sure that we achieve what we want to achieve and that requires a lot from then. At Sundowns you are expected to counter-press, you are expected to press high and all those things are very demanding in the game.

“But our boys have adapted very well because there are the things that we have emphasised on a daily basis, and intensity must always be kept at the right level so that we are competitive.”

Mngqithi said Pirates will test Sundowns because they have capable coaches in Mandla Ncikazi and Fadlu Davids and their players know how to handle big games.

“Mandla and Fadlu are very creative coaches who are intelligent. We know that they will bring a thing or two into the game but we will profile them accordingly and we know what we can get.

“The good thing is that we know almost all their players — if we fail to deal with their strategy, we can easily profile their individual players.

“Our players have responded very well over a number of games and we cannot start to doubt them but Pirates will always have an element of pressure and intrinsic motivation, which is mostly likely to bring an element of anxiety.”