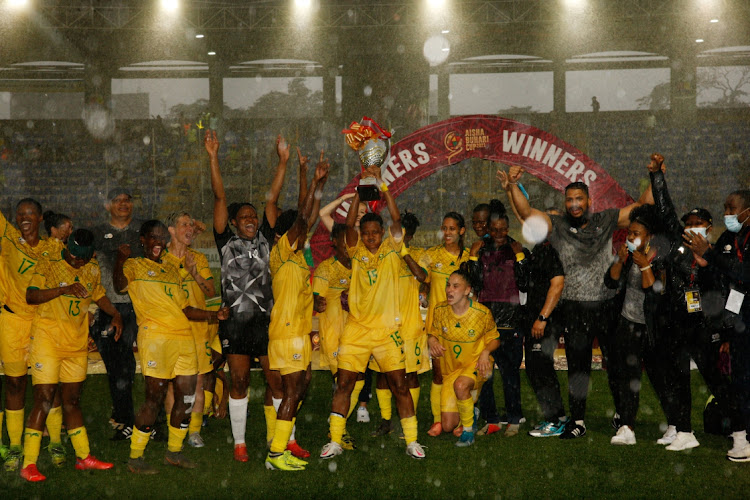 Banyana upset hosts Nigeria 4-2 to win the tournament in Lagos on Tuesday.

Banyana raced into a three-goal first half lead via an own goal by Alozie Chidi, Linda Motlhalo from the penalty spot and a goalmouth header by Gabriela Salgado.

The Super Falcons gave Banyana some nerves earlier in the second half through quick goals. However, Mamello Makhabane ended hopes of a comeback with a penalty with four minutes remaining.

“We were in control for most of the time and played at the tempo we wanted. We controlled all the aspects of the game. We lost concentration in the second half and made errors to allow them to score two goals. We dedicate our success to everyone back home," Ellis said.

"Our country is going through a tough time with Covid-19 and fans not watching the matches at the stadium. Many contributed to the win. The coaches in the Hollywoodbets Super League prepared these players and need a pat on the back. We discussed that we needed more players for the national team and they delivered on their promises. We wanted to give the fans something to cheer about.”

She said it was an ideal test for the squad after not playing competitive football in the national team colours for a long time.

“We wanted a test and we got tested. We need to be consistent with what we do from now. Nigeria has been consistent over a couple of years and we must not forget that they will be back for revenge,” explained Ellis.

Ellis will shift her focus towards the Cosafa Women’s Championships in Gqeberha, Eastern Cape, from  September 28 to October 9.

“We will take some of the lessons learnt here with the group that will represent the national team at the regional tournament. We had a mix of youth and experience in this tournament. We cut off the flow of Nigeria and the younger players will learn from that. The players that came through the Cosafa ranks did well,” added Ellis.

Desiree Ellis hails Banyana heroines: ‘We were in control most of the time’

Banyana Banyana coach Desiree Ellis is pleased with the commitment and focus of her players after their dominant display against the Super Falcons of ...
Sport
4 months ago

Banyana Banyana beat old foes Nigeria 4-2 in a six-goal thriller in an Aisha Buhari Cup clash that had no shortage of excitement at the Mobolaji ...
Sport
4 months ago
Next Article