Desiree Ellis hails Banyana heroines: ‘We were in control most of the time’ 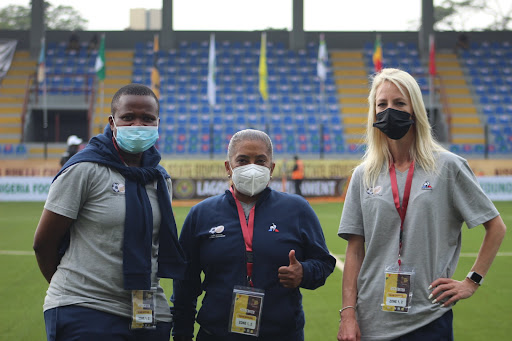 Banyana Banyana coach Desiree Ellis says she is pleased with the commitment and focus of her players after their dominant display against the Super Falcons of Nigeria.

Banyana earned a resounding 4-2 victory to clinch the maiden edition of the Aisha Buhari Invitational Tournament in Lagos, Nigeria on Tuesday night.

“We were in control most of the time, we played at the tempo that we wanted,” Ellis said.

“We controlled a lot of aspects of the game though we gave a lot of free-kicks away, which was dangerous, but we handled it very well.”

Though they won handsomely‚ Ellis was not happy that Banyana conceded two goals in the second half. She said she wants the women's national team to shut the door and remain disciplined at the back.

“Going into the second half we discussed that they were going to come at us and that we needed to stay concentrated, we needed to make sure that we put the foot on the ball. But we did not do that and the two goals came quickly from our errors,” she said.

“I think the players showed a lot of confidence and character to take control back. We took control and we managed the game very well.”

Ellis dedicated Banyana’s outstanding victory to the SA footballing-loving community, commending the women's soccer league for its enormous contribution to the women's game in the country.

“The victory is not just for us here in Nigeria but it is everyone back home who is involved and has contributed to women’s football, from Sasol to the Hollywoodbets Super League,” she said.

In an impressive tournament for the SA senior women’s national team, they scored seven goals in two matches, beating Ghana in a 3-0 win on Friday, as they prepare for the Cosafa Cup in Nelson Mandela Bay from September 28 to October 9.