Lakay should be in the Bafana squad if merit is used, says Sundowns co-coach Mokwena 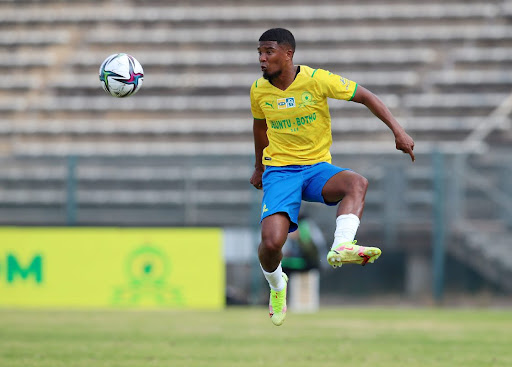 Lyle Lakay should be in the national squad for the crucial back-to-back 2022 World Cup qualifiers against Ethiopia in October if the Bafana Bafana coaches use “meritocracy” to select the team.

This was the view of outspoken Mamelodi Sundowns co-coach Rulani Mokwena after Lakay played his sixth successive match in all competitions for the champions as they cruised past TS Galaxy 3-0 at Loftus on Sunday to take leadership of the DStv Premiership.

Mokwena was asked by a journalist to offer his views about Lakay’s omission from the national squad after the match, where Lakay featured in a back four that played its fourth successive Premiership match without conceding a goal. Belgian coach Hugo Broos announced his 34-man preliminary Bafana squad on Tuesday and Mokwena will have been disappointed that his name was missing from the list.

Lakay missed out on the squad that drew against Zimbabwe and beat Ghana in Soweto in the opening two qualifiers last month.

“And if you want to ask me why Lyle is not in the Bafana team, it is because when I watch Bafana, I see [strikers [Evidence] Makgopa upfront and I see [Bongokuhle] Hlongwane upfront then I see a right-footed full back [Mobbie] at left-back so ...”

Mokwena said, without putting pressure on the Bafana coaches, Lakay’s form since the start of the season merits a national team selection and that all Sundowns players are Bafana material who are readily available to pick from.

“Look we respect the Bafana coach. He has got to make his own decisions and has got his own job to do.

“I mean can you imagine 52-million people who have opinions about who should be in the Bafana team, we can’t be doing that.

“I mean I am a football coach and I know what it is like to be put in a position where you are under a lot of scrutiny and a lot of pressure to pick certain players.

“But if we speak on meritocracy, if we speak about having the best players representing the national team, then of course without being biased or sounding biased, and of course if you ask me about any Sundowns player, the first answer will definitely be 'yes' because I have also got to look after the interests of our players.

“When you have the best players in the country you expect to go into a Fifa window without any [first team] players and the best thing for us is to go to the U19s and MDC side and hold training sessions there.

“That is what we would like to do during the Fifa window, to try and breed this culture and playing style into our youth and the only way to do that is to have all our players going to represent their national teams.

“So maybe a simple way to answer your question is to say yes, because we love our players and believe that they are the best in the country.

Sundowns defenders Rushine De Reuck and Thapelo Morena, midfielder Mothobi Mvala and striker Thabiso Kutumela featured for Bafana in a goalless draw against Zimbabwe and a narrow 1-0 home over Ghana but Mosa Lebusa missed out.

Lebusa cracked the nod this time along with four Sundowns teammates for the matches against Ethiopia but Lakay was not so lucky.

Bafana top Group G on four points while Ethiopia and Ghana are in second and third places respectively on three points with Zimbabwe propping up the group with one point.

Back-to-back wins over Ethiopia in Addis Ababa on October 6 and in Johannesburg four days later will take Bafana to pole position for qualification to the final round.