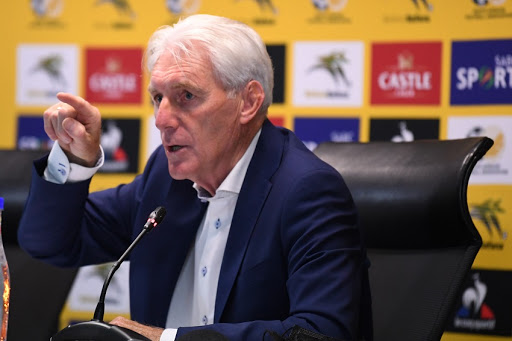 Bafana Bafana coach Hugo Broos has beefed up the Orlando Pirates contingent in his preliminary squad for next month’s crucial 2022 World Cup qualifiers against Ethiopia.

Broos had raised eyebrows including just one Pirates player — left-back Innocent Maela — in his 31-player preliminary squad for last month’s Qatar 2022 qualifiers against Zimbabwe and Ghana, and none in the final 23-man list.

Mabasa fits Broos’ bill as having an eye on the future and has scored twice in three league games since a return from injury for Pirates. Mosele is three years younger and his quality has caught the eye in midfield for caretaker coaches Mandla Ncikazi and Fadlu Davids’ Bucs.

In keeping with the coach’s emphasis on youth, there were no places again for 30-plus stars Themba Zwane, 32, and ex-Bafana captain Thulani Hlatshwayo, 31, while Amiens SC’s Bongani Zungu, 28, remains in the cold.

In a break from the youth policy, though, Kaizer Chiefs’ 31-year-old left-back Sifiso Hlanti is included.

Also included was Royal AM striker Victor Letsoalo, whose brace was the catalyst to a dramatic 4-1 humbling of Chiefs at FNB Stadium on Saturday, and who caught the eye for a Bafana developmental team that won the Cosafa Cup in Gqeberha in July.

Letsoalo has been retained from the squad that did duty as Bafana began with a 0-0 draw against Zimbabwe in Harare and 1-0 win against Ghana at FNB Stadium to top Group G.

In Letsoalo, Mabasa, Percy Tau, Baroka FC’s Evidence Makgopa and Maritzburg United’s Bongokuhle Hlongwane, the scorer against Ghana, Broos has a rare complement of in-form and exciting strikers to choose from.

Having been previously omitted, Chiefs centreback Njabulo Ngcobo, the 2020-21 Premiership defender of the season at Swallows FC, has been included in the provisional squad.

“Coach Broos will whittle down his final 23-man squad on Saturday, October 25 in an announcement that will be live on SABC1 at lunchtime,” The SA Football Association said in a statement.

Bafana meet Ethiopia away on October 9 then at FNB Stadium on October 12.

The Walias began Group G with a 1-0 defeat away against Ghana then beat Zimbabwe 1-0 at home.

Broos has said that if Bafana can beat Ethiopia twice SA will be in prime position to progress to the final, home-and-away playoff round.