The best of Sundowns is yet to come, says coach Rulani Mokwena 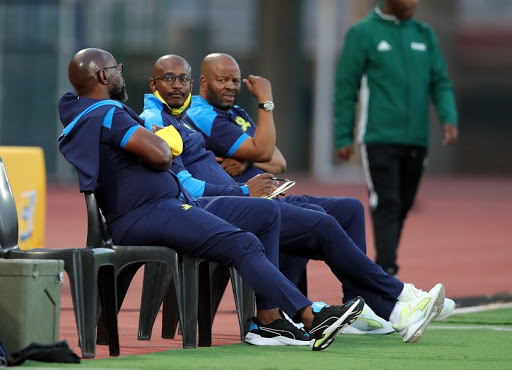 There were reports of a rift among Mamelodi Sundowns co-coaches Steve Komphela, Rulani Mokwena and Manqoba Mnqgithi but the trio have seemingly put that behind them with three wins and a draw in their opening four Premiership assignments.
Image: Samuel Shivambu/ Backpagepix/Gallo Images

Rulani Mokwena has said the best is yet to be seen from champions Mamelodi Sundowns as they set their sights on an unprecedented fifth Premiership title in succession.

The Sundowns co-coach was speaking after the Brazilians romped to a 3-0 victory over TS Galaxy at Loftus on Sunday to regain their top spot as DStv Premiership leaders after match day four.

They have won three and drawn one without conceding a goal in their opening four matches to kickstart debates about whether anyone can stop them this season.

Against a rigid Owen Da Gama-coached side, Sundowns lacked the killer pass in the final third in the first half, but Galaxy simply had no answers when the Brazilians clicked and found another couple of gears in the second half.

Sundowns have collected 10 points out of a possible 12 to lay down the marker for their Premiership title rivals. Mokwena believes that while the team is purring early on, it is not yet at a level of performance where he, co-coach Manqoba Mngqithi and senior coach Steve Komphela would want.

“And [we are not saying this] because we won the match and now we start singing a different song,” said Mokwena after Mosa Lebusa, Peter Shalulile and substitute Thabiso Kutumela scored in the second half.

“From match day one, we knew that five or six games as the season progresses, we knew that we were not going to be at our best and it is still evident.

“The first half we showed very good signs in patches. In the second half we were a lot more dominant and the rhythm was a lot better and the personality of the team was in a space that we want.”

Though Galaxy held their own and kept Sundowns goalless at half time, the champions completely dominated every facet of the game in the second half and at times made the match look like a training session.

“We don’t want to have a team that competes but one that dominates,” said Mokwena.

“That is what is we want and that is what we showed a little bit in the second half, where structurally we were much better and the usage of the ball was a lot better, and our schemes in and out of position were excellent.

“We try to make sure that we look to play a perfect game and we speak about it all the time.

“And, of course, perfection does not exist but the desire to want to be perfect is very important, because when you chase perfection, even when you don’t attain it, you reach a level of excellence and that is what we want.

“But at the same time, we also want to be a team that is very difficult to play against. We don’t want anyone that comes and plays Sundowns and thinks it is a walk in the park.

“So from a technical and tactical perspective, it is important that we get our preparation right and we move in a way that speaks about humility and respect but also to repay the work that we put in behind the scenes.

“We work extremely hard and there is a lot of investment that happens in the club holistically, and so it is very important that the performance and the personality of the team reflect that.”

Sundowns face Orlando Pirates in their next Premiership fixture on Saturday at Orlando Stadium in Soweto.