Champs yet to concede a goal

Sundowns drub Galaxy to shoot back to top of league 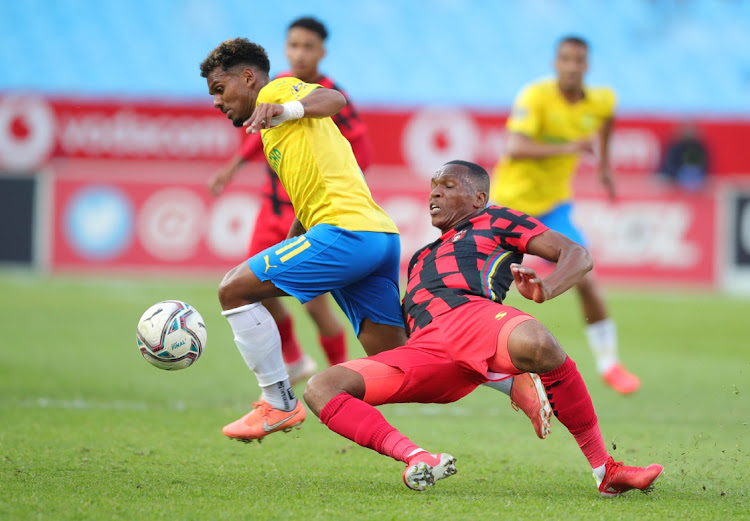 Mamelodi Sundowns looked to have hit top gear after a slow start to the DStv Premiership season following their 3-0 emphatic victory over TS Galaxy at Loftus yesterday.

The win follows their 2-0 victory over Kaizer Chiefs. Yesterday they were ruthless, with goals from Mosa Lebusa, Peter Shalulile and Thabiso Kutumela giving them all three points and taking them back to the top of the log table.

It was a brilliant display from Sundowns, who are yet to concede a goal in the league, with four clean sheets in four matches.

The Rockets remain without a win this season in four matches, with three defeats and a draw, and this could be some concern for coach Owen da Gama. What will also be concerning for him is his side's failure to score goals this season. Their only two goals came in the 2-2 draw with Golden Arrows.

As expected, Sundowns dominated possession earlier on, looking for an early goal, but Galaxy defended well.

Galaxy were forced to sit back and absorb pressure from Sundowns while also waiting for the counter-attack ball.

The Rockets then applied a high-pressing game as an attempt to end Sundowns' dominance and did that well.

Despite enjoying the majority of possessions, Sundowns failed to make use of it as they could not even take a shot.

They started to find openings with Gaston Sirino, Themba Zwane, Shaulile and Kermit Erasmus getting chances but they could not convert them.

Galaxy failed to trouble Sundowns keeper Dennis Onyango and did not even have a single shot on target in the opening half.

Things looked good for them at the interval, but Sundowns came back a different side after the break, with more energy.

They were patient in their build-ups and it was not long before the floodgates were opened. First Lebusa converted from a rebound after Vasilije Kolak failed to hold the ball from a Lyle Lekay free-kick.

A minute later, Shaulile made it 2-0 against the run of play and with Galaxy not looking like scoring, the match was already done and dusted.

Kutumela then made it 3-0 late in the match against the run of play to put the game was beyond Galaxy’s reach. It was a solid performance from the Brazilians, who will face Orlando Pirates on Saturday.

MaMkhize: Royal ‘in no rush’ to compete with Chiefs, Pirates and Sundowns

KwaZulu-Natal businesswoman and Royal AM owner Shauwn Mkhize says her football club is not in the DStv Premier League to compete with the likes of ...
Sport
1 month ago
Next Article