I made a blunder, says Galaxy coach Da Gama after heavy defeat to Sundowns 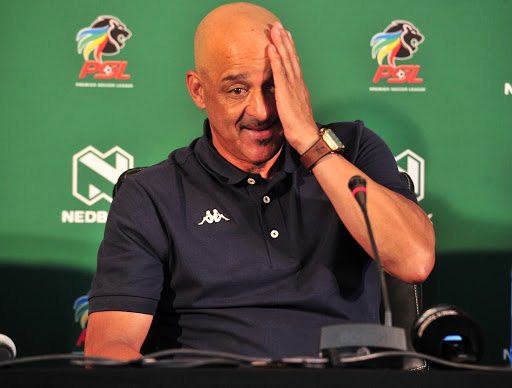 TS Galaxy coach Owen Da Gama has shouldered the blame for the 3-0 defeat to a rampant Mamelodi Sundowns at Loftus on Sunday and said it was his “tactical blunder” that led to his team falling apart in the second half.

Having matched Sundowns toe-to-toe and kept the champions goalless in the first half, Da Gama said he lost the plot at the start of the second half when he pulled off Masilake Phohlongo and introduced Sinethemba Mngomezulu, while shifting centre-forward and captain Mxolosi Macuphu out to the right side of the attack.

“The tactical blunder was that we pushed Macuphu to the right and we brought Sthembiso [Sinethemba] on as a striker and I think it was unfortunate because two of the goals came from there, but that is all part of the learning curve,” said Da Gama.

“I’m very disappointed in the second half. I think if we just held our nerve, and if we played the way we played in the first half, I think we would have seen something, but as I say, blunder from me and I take full responsibility.

“I thought we started quite well but then we made a tactical blunder at half time and obviously things turned against us, but it is part of the learning curve.

“You never know what players do on the day when you allow them to change positions but credit must go to Sundowns. They played very well and continued to press.

“I think they are a team that is settled. The players know each other. When they make substitutes the team gets stronger.

“It is a well-oiled team, no doubt about it, and there is a reason they are champions.”

Da Gama has only two points to show from a possible 12 and Galaxy are languishing in 15th spot on the DStv Premiership log standings as one of three teams who are yet to win a match.

“We will keep working hard and try to turn the corner,” said Da Gama, who pointed to what he said was a difficult start in his opening four matches.

Galaxy held Kaizer Chiefs to a goalless draw in Mbombela, lost 1-0 away at Stellenbosch, came from behind to draw 2-2 against Lamontville Golden Arrows before they came unstuck 3-0 against Sundowns.

Pressure is mounting on the Galaxy coach ahead of their trip to Chatsworth on Sunday to face a Royal AM side high on confidence after they thrashed Chiefs 4-1.

“It is a difficult period for everybody,” said the 60-year-old former Orlando Pirates coach.

“There are some surprise packages and yes, we have started with some tough games, Golden Arrows, Chiefs and Sundowns, but I would rather have it that way and we learn and grow as quickly as possible.

“It is always concerning when you are not winning. Good result against Arrows. I think they were one of the surprise packages last season and we came back and drew 2-2 with them.”