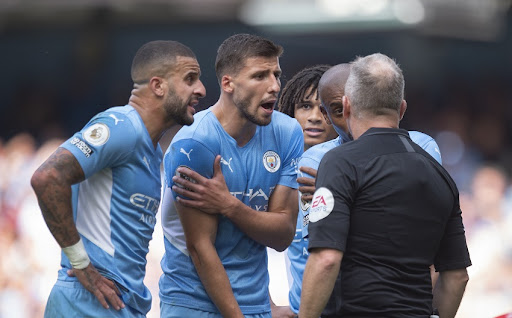 Manchester City were held to a frustrating goalless draw at home by Southampton in the Premier League on Saturday, despite being handed a reprieve when a VAR review led to a penalty and a red card for Kyle Walker both being overturned.

After an uneventful first half where City were well below par, Southampton thought they had been handed a golden chance to edge in front early in the second period as they were awarded a penalty for a foul on Adam Armstrong.

To make matters worse for City, Walker was sent off for the foul, only for referee Jon Moss, following a VAR intervention, to overturn both the red card and the awarding of the spot kick.

Kevin De Bruyne and Phil Foden were both summoned from the bench as City pressed for a winner, which they thought they had grabbed at the death through Raheem Sterling, but his effort was ruled out for offside.

The result means City fall three points behind leaders Liverpool in second place, ahead of third-placed Manchester United, who are in action at West Ham United on Sunday, on goal difference.

"We were not good in our buildup and missed simple passes," City coach Pep Guardiola said. "The reason we lost is because our process, all over the pitch, was not good enough.

"We had chances to shoot, but we were not clinical enough. We have to create much more."

Guardiola's side came into the contest having scored five goals in each of their previous three home league games, as well as six in the Champions League in midweek.

But the Spaniard's five changes to the side who won 6-3 against RB Leipzig on Wednesday seemed to have a detrimental effect, with the champions failing to create any openings of note in the first half.

A sloppy City did not improve in the second half, and they were carved open by Armstrong, who appeared to be upended by Walker as he was about to shoot just after the hour mark.

As Walker headed for the tunnel, referee Moss was asked to review his decision on the pitchside monitor, and elected to change his mind, much to the relief of a frustrated Etihad.

"It was a strange one for me that it can go from a red card and penalty to absolutely nothing," Southampton captain James Ward-Prowse said. "Surely there has got to be something in between."

The let-off got the crowd - who gave Guardiola a warm welcome despite the City coach's comments in midweek urging fans to show up in greater number - off their seats, but it failed to galvanise the players.

City only had one shot on target in the entire match - their lowest tally in a Premier League game since March 2017 - and from that effort, a 90th-minute Foden header that was saved by Alex McCarthy, Sterling thought he had scored on the rebound.

The lineman's flag denied the England international the glory, however, with VAR confirming that the decision was the right one.