Galaxy not prepared to roll over in league clash 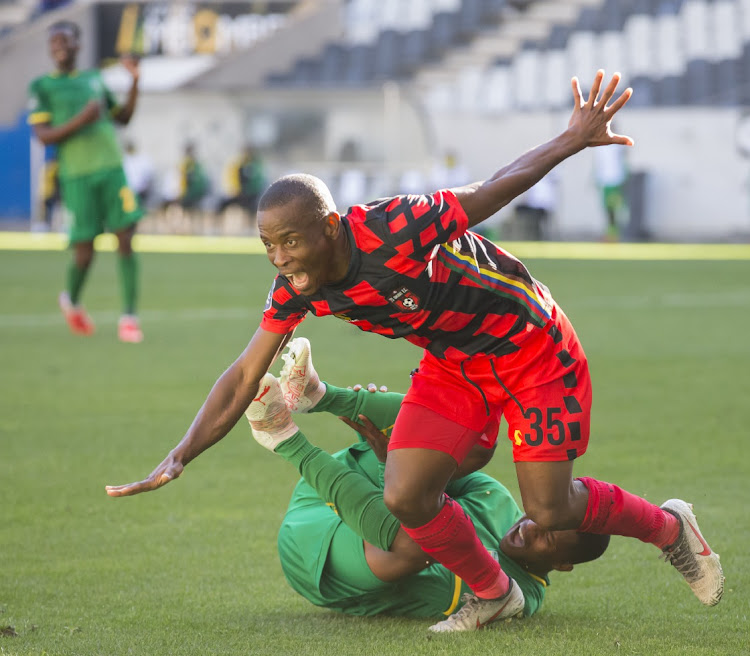 Lindokuhle Mbatha of TS Galaxy insists that defeat against Mamelodi Sundowns is not an option for his side. The team has not won in the league this season.
Image: Dirk Kotze/BackpagePix

Mamelodi Sundowns will hope to maintain their perfect start to their DStv Premiership campaign with another eyeing-catching performance when they entertain TS Galaxy at Loftus Versfeld on Sunday (5pm).

Sundowns defeated Kaizer Chiefs 2-0 at the same venue in their previous league game. Goalscorer Grant Kekana said they would not underestimate TS Galaxy.

“We did well against Chiefs and we will approach this game with confidence. We have set high standards for ourselves. TS Galaxy will go all out but we have enough quality in the squad. They will be physical but we believe we can register another win,” said Kekana through the club’s media platform.

On paper, it should be another routine win for the holders.

However, TS Galaxy star Lindokuhle Mbatha fired a warning shot at Downs, insisting that defeat is not an option for his side.

“We cannot afford to lose this game. We have to collect three points or avoid losing this game. We will go all out to fight in this match,” said Mbatha through the club’s media platform.

TS Galaxy have not won in the league and collected just two points from three matches. They played to an entertaining 2-2 draw against Golden Arrows in their previous league game.

Coach Owen da Gama would expect his charges to rise to the occasion and pull off an upset against the fancied Sundowns outfit.

Mbatha said the coach motivated them to go to the capital and pull off an upset against the defending league champions.

Mbatha said the mood was high in the camp, and there is a growing belief that they could stun the champions.

“It’s either we get the maximum points or collect a point. Everyone is prepared and ready to put in the hard work against Sundowns. We know their weakness. We have a grand plan to steal the three points from them.”

The former Sundowns defender said he knew their strengths and weakness. “It’s not about me. I have nothing to prove and I want to help my team to win the game. We have to focus on our battles and win them, and then we will win the war.”

Kaizer Chiefs coach Stuart Baxter has made a strong case for why he intends to keep using off-form striker Samir Nurkovic at left-wing.
Sport
1 month ago

Banyana Banyana coach Desiree Ellis has named her final 20-woman squad to participate in the 2020 Cosafa Women’s Championship in Gqeberha.
Sport
1 month ago

Mamelodi Sundowns defender Grant Kekana is expecting a physical game from TS Galaxy in their DStv Premiership encounter at Loftus on Sunday.
Sport
1 month ago

Jele owes it all to Khoza, he says of magical 400 milestone at Orlando Pirates

Orlando Pirates captain Happy Jele says, upon reaching the milestone of his 400th club appearance, that he's grateful for the support he got from the ...
Sport
1 month ago
Next Article