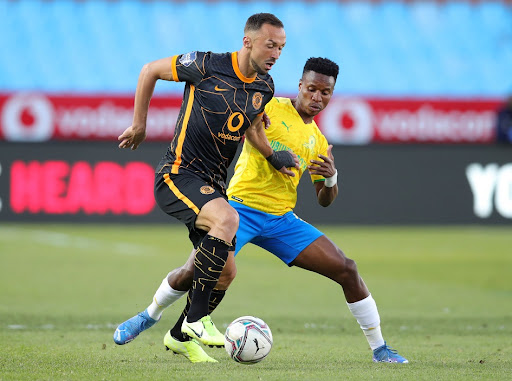 Samir Nurkovic of Kaizer Chiefs is challenged by Themba Zwane of Mamelodi Sundowns in the DStv Premiership match at Loftus Versfeld in Pretoria on September 12 2021.
Image: Samuel Shivambu/BackpagePix/Gallo Images

Samir Nurković is low on confidence in front of goal but while he is playing an important role in Kaizer Chiefs and getting into scoring positions coach Stuart Baxter will resist benching the prolific Serbian, the coach has said.

Baxter said Nurković needs a goal in 2021-22 to allow the striker — utilised in a left midfield position so far this season that the club's supporters have not fully grasped — to begin to ease some of the pressure he has put on himself.

Baxter’s thinking in an innovative employment of Nurković showed potential when Chiefs put Baroka FC to the sword in an opening 45 minutes at FNB Stadium before the Fifa break. Amakhosi  might easily have scored more than two goals in a DStv Premiership game they eventually ran out 2-1 winners in.

The left-footed Keagan Dolly in right midfield and right-footed Samir Nurković on the left, coming inside as additional roaming playmakers to Bernard Parker, and Khama Billiat as a false No 9, with overlapping fullbacks Njabulo Blom and Sifiso Hlanti providing width, was a cocktail Baroka could not contend with. Nurković also attacked the crosses when the ball came in from the right.

The system — tweaked into a 3-4-3 — did not work as well in Chiefs' 2-0 defeat against Mamelodi Sundowns on the weekend, with Nurković awkward on the left.

Baxter pointed out that Nurković’s struggles with form go back to last season, so fans identifying the striker playing on the left as a reason for his waywardness against Downs is not necessarily correct.

“I'd still like to say we got have him into more scoring positions from that position,” Chiefs' coach said, grilled on some of his early-season selections that have raised eyebrows in a pre-match press conference to Saturday's matchup against Royal AM at FNB Stadium (5pm).

“I watched a lot of footage from last year when he was playing as an out-and-out 'nine' with his back to goals and he was lacking confidence and lacking getting into scoring positions.

“I think the fans are not interested too much in false nine's and inverted fullbacks. They want to see goals.

“I think when the result is a disappointing one then a lot of the nuances of how you tried to set up your team, that disappears. So I think we need to accept that.

“But I can't be shuffling the pack every time there's a result [against Sundowns] that goes against us, especially if it’s a result I thought was quite a poor reflection of the game.

“I think we've got to have a bit more patience and persistence than that.”

Baxter agreed Nurković has lacked confidence in front of goal.

“I think Samir is, not in a crisis, but he's a striker who has lived the whole of his career with goals as the gold standard,” the coach said.

“And even if he's playing well for the team at the moment, and getting into scoring positions, he's not tucking them away and that displeases him immensely, and causes him frustration. And , yes, he is waiting for that goal to ease the pressure on himself.

“At the point that it becomes a problem where I think that he needs to take a step back I'll rest him.”

Chiefs have shown various degrees of progression with a new-look squad as Baxter seeks his best combination. The coach will hope for more answers against unpredictable Royal.